The Miami Heat drafted Smith with the fifth overall pick during the first round of the 1991 NBA Draft. He played with the Heat until 1994, then joined the Atlanta Hawks until 1999. Smith's other teams include the Portland Trail Blazers from 1999 until 2001, the San Antonio Spurs from 2001 until 2003, the New Orleans Hornets from 2003 until 2004, the Charlotte Bobcats from 2004 until 2005, and the Miami Heat again in 2005. Smith was a member of the league's All-Rookie First Team in 1992 and named an All-Star six years later in 1998. He was on the 2003 Spurs' championship-winning team. Smith was the recipient of the 2002 NBA Sportsmanship Award and the 1998 J. Walter Kennedy Citizenship Award. He was named the Shooting Stars champion in 2011. Smith played on the U.S. men's national team, winning a gold medal at the 2000 Summer Olympics in Sydney. He also won gold at the FIBA World Championship in 1994 in Canada and in 1999 in San Juan. After his retirement, Smith worked as a Hawks announcer and a Big Ten college basketball analyst. He has a reputation for his charity work, including the creation of the Steve Smith Scholarship for Academic Achievement at Michigan State. 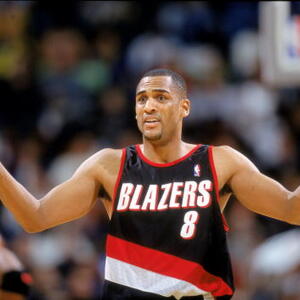