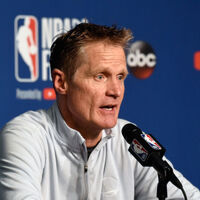 What is Steve Kerr's net worth and salary?

Steve Kerr is a retired American professional basketball player and current NBA coach who has a net worth of $45 million. Steve played 14 seasons in the NBA. He then became a broadcaster and executive for the Phoenix Suns. He became head coach of the Golden State Warriors in May 2014. With the Warriors to date he has won three NBA Championships. He won five NBA Championships as a player.


During his NBA playing career Steve earned a total of $15.8 million. That's the same as around $24 million today. His biggest playing salary came during his final season, 2002-2003, when he earned $2.625 million from the San Antonio Spurs.

When he became coach of the Warriors he signed a five-year $25 million deal in 2014. That's $5 million per season. He agreed to a contract extension in July 2018. Terms were not released but it's believed that the deal was not significantly different in terms of salary.

Steve Kerr was born on September 27, 1965 in Beirut, Lebanon. Steve's grandfather Stanley Kerr was an American humanitarian who moved to Beirut to help rescued woman and orphans hurt by the Armenian Genocide. Steve's father Malcolm initially studied at Princeton but returned to Lebanon to finish his studies after dealing with a debilitating case of arthritis. Malcolm ended up earning several advanced degrees including a Ph.D. in Arabic Studies. Malcolm met Ann Zwicker while they were both studying at the American University of Beirut. Steve, born in 1965, would be third of four total children.

Tragically, Malcolm was assassinated by militant nationalists in Beirut on January 18, 1984. At the time he was serving as president of the American University of Beirut. Steve was 18 years old at the time, a freshman at the University of Arizona. The family would later sue the government of Iran under the Antiterrorism and Effective Death Penalty Act of 1996.

Despite being minimally recruited in high school, Steve would go on to have an impressive collegiate playing career. He even landed a spot on the USA Basketball team that won a Gold Medal at the 1986 FIBA World Championship games. This was the last year where the major Men's basketball teams were required to consist strictly of non-professionals, hence the 1992 Olympic "Dream Team" consisting of players like Michael Jordan, Charles Barkley and Magic Johnson.

Steve was selected in the second round of the 1988 NBA draft by the Phoenix Suns. He was traded to the Cleveland Cavaliers in 1989. His most notable success came during his time with the Chicago Bills. During his career with the Chicago Bulls he won three-consecutive NBA Championships. His teammate Michael Jordan was famously very hard on Steve during their time together and infamously even went so far as to punch him during a practice. He won two additional Championships with the San Antonio Spurs, in 1999 and 2003.

Steve Kerr is currently the record holder for having the most accurate three-point shot in NBA history. 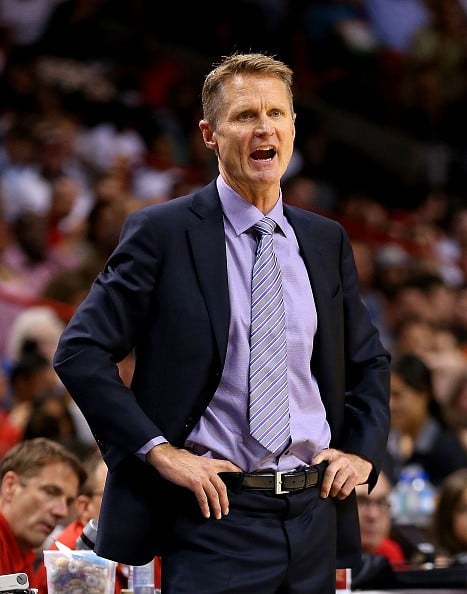 Kerr retired following the 2003 championship season. He was immediately hired as a broadcast analyst for Turner Network Television (TNT). While working for TNT, he also contributed as an NBA commentator to Yahoo!. He is the voice commentator on several video games such as NBA Live 06, NBA Live 07, NBA Live 08, NBA Live 09, and NBA Live 10. He provided the voice of the color commentator for NBA 2K12 in 2011. Kerr joined the team of Jim Nantz and Clark Kellogg for the First Four and final four games of the NCAA Men's Division I Basketball Championship starting in 2011 for Turner Sports and CBS.

In 2004 Kerr and a group of investors attempted to buy the Phoenix Suns from owner Jerry Colangelo for $300 million. The deal was never consummated but Steve ended up serving as the team's General Manager from 2007 to 2010.

Steve continued working for the Suns until May 14, 2014 when it was announced that he would become head coach of the Golden State Warriors. He had been hotly recruited by a number of teams, notably the Knicks, but the Warriors eventually coaxed him with an initial 5-year $25 million contract.

In his first season Steve broke the record for most regular season wins by a rookie coach. The Warriors, thanks largely to superstar Steph Curry, won the NBA Championship. Steve was the first rookie coach in nearly 30 years to win an NBA Championship in his first season. The Warriors made it to the finals four straight years, winning in 2017 and 2018.

Steve has been married to his college sweetheart Margo since 1990. They have three children together.

In August 2018, Steve and Margo paid $7.35 million for a 4,000 square-foot home in San Francisco's Presidio Heights neighborhood. They actually over-paid by $1.4 million over asking.