Stephen Jackson Net Worth and Salary: Stephen Jackson is a retired American professional basketball player who has a net worth of $20 million. Stephen played in the NBA from 2000 to 2013. During that time he earned $68.6 million in salary alone.

He was born on April 5, 1978 in Houston, Texas. Stephen Jackson played college basketball at Butler Community College from 1996 until 1997. The Phoenix Suns drafted Jackson with the 42nd overall pick during the second round of the 1997 NBA Draft. Soon after the draft, the Suns waived him, so he went on to play for the La Crosse Bobcats of the Continental Basketball Association and the Sydney Kings in the National Basketball League in Australia. Jackson played overseas in Venezuela and the Dominican Republic before making his NBA debut during the 2000-01 season with the New Jersey Nets.

Off the court, Stephen is heavily involved in several charities and won the NBA's Community Assist Award in the spring of 2008. Jackson is the founder of the Stephen Jackson Academy of Art, Science, and Technology. 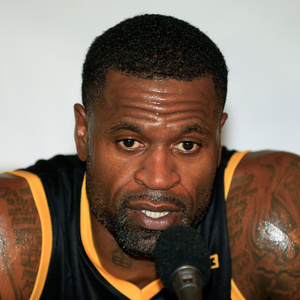