Shawn Marion net worth: Shawn Marion is an American basketball player who has a net worth of $60 million. Shawn Marion was born on May 7, 1978 in Waukegan, Illinois. His nickname is "The Matrix" and he's known for his unusual shooting form. He attended the junior college Vincennes before transferring to UNLV, where he played for two years.

In 1999, Marion was drafted by the Phoenix Suns, who took him with the ninth pick. He stayed with Phoenix until midway through the 2007-08 season, appearing in two conference finals during his tenure. During the 2007-08 season, Marion was traded to the Miami Heat. Just over a year later, Marion was traded to the Toronto Raptors, and stayed with the team until the end of the 2008-09 season. He signed a contract extension and was traded immediately to the Dallas Mavericks, where's he played since 2009. In 2011, Marion won his first NBA title when Dallas defeated the Miami Heat in six games in the NBA Finals. For his career, Marion has been selected to four All-Star teams (2003-05, 2007), two All-NBA Third Teams (2005, 2006), and the NBA All-Rookie Second Team in 2000. He was also a member of the All-Star Shooting Stars winning team during the 2005 All-Star game. 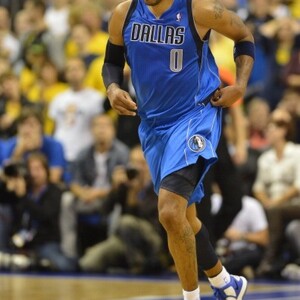