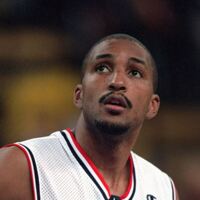 Born in 1976 in Marietta, Georgia, Shareef Abdur-Rahim played college basketball at Cal and was named Pac-10 Player of the Year. In 1996, the Vancouver Grizzlies chose him with the third overall pick of the NBA draft, just one season after he began his college career. Abdur-Rahim made his debut with the Grizzlies later the same year, earning All-Rookie First Team honors. He played with the Grizzlies until 2001. Abdur-Rahim also played for the Atlanta Hawks from 2001 until 2004, the Portland Trail Blazers from 2004 until 2005, and the Sacramento Kings from 2005 until 2008. He was a 2002 NBA All-Star and finished his career with 15,028 points, 6,239 rebounds, and 2,109 assists. Abdur-Rahim played for the U.S. men's national team, winning gold at the 2000 Olympic Games in Sydney, Australia, and gold at the 1994 FIBA Americas U18 Championship in Santa Rosa. He went by the nickname "Reef". Abdur-Rahim was forced to retire during the fall of 2008 after enduring several injuries to his knee. During the summer of 2013, he became the Reno bighorns' general manager. Abdur-Rahim has two children with his wife, Delicia, and runs the Future Foundation, which is dedicated to providing safe and productive after-school activities to children in the Atlanta area.