Shandon Anderson Net Worth: Shandon Anderson is a retired American professional basketball player who has a net worth of $22 million. Shandon Anderson was born in Atlanta, Georgia, in 1973, and played high school basketball at Alonzo A. Crim High School. He stayed close to home for his collegiate career, joining the University of Georgia Bulldogs for all four seasons from 1992 until 1996. Anderson played with the team from 1992 until 1996 when the Utah Jazz drafted him with the 54th overall pick during the second round of the 1996 NBA Draft. Anderson played with the Jazz from 1996 until 1999 before joining the Houston Rockets from 1991 until 2001. Anderson went on to wear the uniforms of the New York Knicks from 2001 until 2004 and, finally, the Miami Heat from 2004 until 2006. Anderson was part of the Heat team that won the 2006 NBA Championship along with Alonzo Mourning, Shaquille O'Neal, Dwayne Wade, and Antoine Walker. Following his title win with Miami, Anderson retired from playing professional basketball. He finished his pro playing career with 5,327 career points, 2,252 rebounds, and 1,007 assists. The six-foot-six, 208-pound small forward/shooting guard averaged more than seven points, three rebounds and one assist per game during his career. 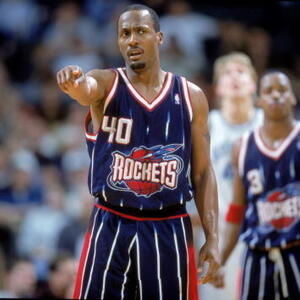