Serge Ibaka net worth: Serge Ibaka is a Congolese-Spanish professional basketball player who has a net worth of $12 million dollars. Serge Ibaka was born in Brazzaville, Republic of the Congo in 1989. He is the third youngest of 18 children. Both of Serge's parents were basketball players, with his father playing for the Congolese national team, and his mother playing for the Democratic Republic of Congo. Serge used playing basketball to escape his pain due to his mother's young death and his father being imprisoned. At 17 Serge moved to France and then moved to Spain. He won an MVP award at Reebok Eurocamp in 2008 where he became noticed by NBA scouts. Serge Ibaka was drafted 24th by the Seattle SuperSonics in 2008. Ibaka was only the second player from the Republic of Congo to be drafted into the NBA (Dikembe Mutombo). It was agreed that Ibaka would stay in Europe and he played for three years with Ricoh Manresa in Spain. He joined the Oklahoma City Thunder in 2009. Ibaka is commonly referred to as Serge Iblocka for his mastery of blocking shots. In 2012 he signed a four-year deal with the Thunder for $48 million. Ibaka chose to play for the Spanish national team and won a silver medal in the 2012 Summer Olympics. Throughout his NBA career Ibaka has averaged better than 10 points, 7 rebounds, and 2 blocks per game. 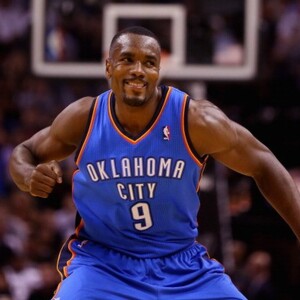