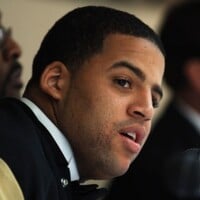 Sean May Net Worth

Sean May net worth: Sean May is an American former professional basketball player who has a net worth of $3 million. Sean May was born in Chicago, Illinois in April 1984. He currently serves as the assistant to the director of player development at the University of North Carolina. May was a 6'9″ power forward who played at Bloomington North High School and North Carolina. In college he was an NCAA Champion and NCAA Final Four Most Outstanding Player in 2005. May was also a consensus second-team All-American in 2005 and was named the USA Basketball Male Athlete of the Year in 2004. May was drafted #13 by the Charlotte Bobcats in the 2005 NBA Draft. He played for the Bobcats from 2005 to 2009 and for the Sacramento Kings from 2009 to 2010. After that he played in Turkey, Croatia, and France. May represented the United States in international competition and won a Gold Medal at the 2004 FIBA Americas U-20 Championship. In 2009 he signed a one year deal with the Kings for $884,881.