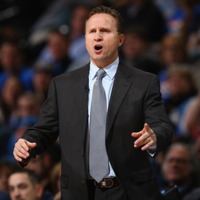 Scott Brooks net worth and salary: Scott Brooks is an American professional basketball coach and former professional basketball player who has a net worth of $10 million. Scott Brooks was born in French Camp, California in July 1965. Brooks was a point guard who played at TCU, San Joaquin Delta, and UC Irvine. He went undrafted and signed with the Albany Patroons of the CBA for the 1987-88 season and then played for the Fresno Flames of the WBL in 1988. Brooks joined the NBA's Philadelphia 76ers. During his career he played for the Minnesota Timberwolves, Houston Rockets, Dallas Mavericks, New York Knicks, Cleveland Cavaliers, and Los Angeles Stars of the ABA. In 1994 Brooks won an NBA Championship with the Houston Rockets. During his season playing with the Stars he was also an assistant coach for the team. Brooks got his first head coaching job for the ABA's Southern California Surf from 2001 to 2002. He was an assistant coach for the Denver Nuggets from 2003 to 2006 and then for the Sacramento Kings from 2006 to 2007. Brooks was an assistant coach for the Seattle SuperSonics/Oklahoma City Thunder from 2007 to 2008 and became the Thunder's head coach in 2008. Brooks won the NBA Coach of the Year Award in 2010 and won the Western Conference Championship in 2012. He coached the NBA All-Star Game in 2012 and 2014. In 2012 he signed a multi-year head coaching deal worth $18 million.