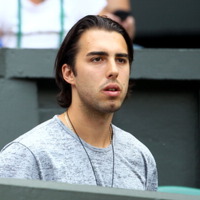 Sasha Vujacic Net Worth: Sasha Vujacic is a Slovenian professional basketball player who has a net worth of $12 million. Sasha Vujacic earned his net worth through his career in basketball. Born Aleksandar "Sasha" Vujačić on March 8, 1984, in Maribor, at the time part of the Socialist Republic of Slovenia, he is currently playing for Anadolu Efes of the Turkish Basketball League (TBL). The son of Vaso Vujačić, a Serbian basketball coach, Sasha got acquainted with the game at an early age and turned pro at 16. He made his professional debut with Snaidero Udine of Italy. After three years with the team, Vujacic was drafted by the Los Angeles Lakers in the 2004 NBA Draft. Playing as a shooting guard, he has proved to be a precise shooter for the Lakers and even earned the nickname of the "Machine" due to his ability to hit several three pointers in a row. Before signing a two-year contract with the Anadolu Efes, he had briefly played for the New Jersey Nets of NBA. In addition to his achievements on the basketball court, Vujacic has also attracted fans' attention with his ill-fated engagement to professional tennis player Maria Sharapova. The two separated in 2012.