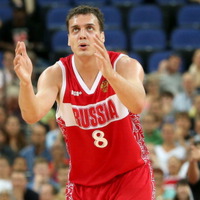 Sasha Kaun net worth: Sasha Kaun is a Russian professional basketball player who has a net worth of $3 million. Sasha Kaun was born in Tomski, Russian SFSR, Soviet Union in May 1985. He is a 6'11" center who played at Florida Air Academy High School. Kaun played his college basketball at the University of Kansas where he won the NCAA championship in 2008. He was drafted #56 by the Seattle SuperSonics in the 2008 NBA Draft but ended up playing for CSKA Moscow in Russia from 2008 to 2015. He was a five time VTB United League champion and a five time Russian League champion. Kaun won the Russian Cup and was named the VTB United League Defensive Player of the Year in 2014. He also won a Bronze Medal representing Russia at the 2012 London Olympic Games. Kaun signed with the NBA's Cleveland Cavaliers in 2015. In 2016 he made his first NBA Finals with the Cavaliers.