What is Sam Bowie's Net Worth and Career Earnings?

Sam Bowie is a retired American basketball player who has a net worth of $5 million. As a 7'1″ and 235 lb center Sam Bowie is probably most famous for being drafted one position AHEAD of Michael Jordan. Sam earned a little under $18 million in total salary in the NBA over 10 seasons in the NBA. By comparison, Michael Jordan's career earnings (endorsements included) easily exceed $1 billion without even counting the value of his NBA team ownership. Michael Jordan's net worth today is $2.2 billion.

Samuel Paul Bowie was born on March 17, 1961, in Lebanon, Pennsylvania, to Cathy and Ben Bowie, who was 6′ 10″ and played for the Harlem Magicians for six seasons. He attended Lebanon High School where he played basketball for the Cedars and became a highly recruited prospect. He averaged over 28 points and 18 rebounds per game and was named a McDonald's All-American and Parade All-American. During his junior year, the team lost in the state finals to Schenley High School 51-50. Bowie was named National Player of the Year for 1979 and one of the top high school centers.

Sam Bowie went on to play college basketball at the University of Kentucky where he averaged 12 points and eight rebounds as a rookie. His sophomore season, he increased those numbers to 17.5 points and nine rebounds per game. He missed the entire 1981-82 season due to injury but returned the next year and was selected to the Associated Press second-team All-American team. As a senior, he earned a spot on the cover of "Sports Illustrated." Sam Bowie had his No. 31 jersey retired by the Kentucky Wildcats in 2002, and in 2005 he was inducted into the University of Kentucky Athletics Hall of Fame. 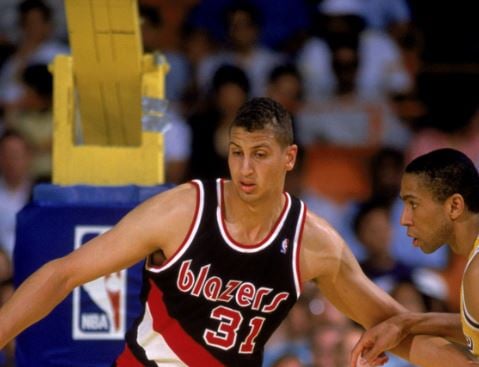 During the 1984 NBA Draft, Sam Bowie was selected second overall to the Portland Trail Blazers, behind Hakeem Olajuwon and ahead of Michael Jordan. Portland was desperate for a solid big man as they hadn't had one since Bill Walton's departure in 1979. Bowie played 76 games in his rookie season and averaged 10 points and 8.6 rebounds per game, earning a spot on the NBA All-Rookie Team. But during his second season, he got tangled up with another player and landed on the floor breaking his left tibia. Bowie would have recurring leg and foot injuries throughout the rest of his career, and because of this, ESPN named him the worst draft pick in the history of North American professional sports. "Sports Illustrated" also named Sam Bowie the biggest draft bust in NBA history.

Sam Bowie made $17.8 million in salary alone in his NBA career, including $4.8 million earned with the Los Angeles Lakers during his last year in the league.

Sam Bowie married his girlfriend, Stephanie, in April of 2018 in La Fortuna, Costa Rica. He has been married twice and has three children, now all grown.

After his basketball playing career, Bowie did color commentary for Kentucky Basketball and got involved in harness racing, both owning and training horses at The Red Mile in Lexington.