What is Russell Westbrook's Net Worth and Salary?

Russell Westbrook is an American professional basketball player who has a net worth of $200 million. He is one of the highest-paid athletes in the world both in terms of salary and endorsements. After joining the NBA in 2008, Russell went on to earn $250 million in salary alone in his first decade in the league. As of this writing, his base salary is $44 million. He earns millions more every year from endorsements.

In September 2017, Westbrook signed both the largest contract in Jordan Brand history (a 10-year deal worth a reported $150 – $200 million) and in NBA history (a 5-year $205 million extension). When Oklahoma City traded Russell to Houston in 2019, the Rockets absorbed the contract, meaning his salary would average $41 million per year. He was traded to the Washingon Wizards in 2020 and then the Los Angeles Lakers in 2021. His record for largest NBA contract stood until December 2020 when Giannis Antetokounmpo signed a five-year $228.2 million deal.

In June of 2022, Russell opted to accept his option to remain with the Lakers at a salary of $47.1 million.

Westbrook earned $53 million between June 2018 and June 2019 from salary and endorsements. As his base salary climbed above $40 million, his total annual earnings with endorsements tops $60 million.

Russell Westbrook was born Russell Westbrook III on November 12, 1988, in Long Beach, California. He grew up in Hawthorne with mother Shannon, father Russell Jr., and younger brother Raynard. Russell and his best friend, Khelcey Barrs III, dreamt of playing basketball together at UCLA, but Barrs, who had an undiagnosed enlarged heart, sadly died during a scrimmage in 2004, while the two were students at Leuzinger High School. Westbrook started on Leuzinger's varsity team as a junior and averaged 25.1 points per game during his senior year. He was offered a scholarship to play basketball at UCLA, and during his sophomore year, he was the team's starter and Pac-10 Defensive Player of the Year. In 2008, Russell dropped out of UCLA and entered the NBA draft.

During the NBA draft, Russell was selected fourth overall by the Seattle SuperSonics, who became the Thunder six days later after moving to Oklahoma City. On July 5, 2008, Westbrook signed with the Thunder, and during his first season, he averaged 15.3 points per game and was named to the NBA All-Rookie First Team. He became a full-time starter during his second year on the team, and the Thunder qualified for the playoffs that season. On November 26, 2010, Russell scored 43 points, which was a career high of his at the time, and in 2011, he was chosen to play in the NBA All-Star Game and was named to the All-NBA Second Team, two honors he would experience again in 2012. The Thunder made it to the NBA Finals in 2012, and Westbrook became the first player since Michael Jordan to score 25+ points and 10+ assists in his first NBA Finals game. Russell also played on the 2012 Summer Olympic team, bringing home a gold medal.

In 2013, the Thunder made the playoffs and were the #1 seed in the Western Conference. Russell injured his right knee during the second game of the playoffs but still managed to score 29 points; the next day he discovered that he had a slight tear in his meniscus. He underwent surgery on April 27, 2013, and had to sit out the rest of the playoffs; he had to have a second surgery before the 2013–14 season began and ended up missing the first two games. Westbrook then had arthroscopic surgery on his right knee just after Christmas and did not return to the court until February 20, 2014. In March 2014, the Thunder competed in the Western Conference Finals but lost in game 6. During the beginning of the 2014–15 season, Russell fractured the second metacarpal in his right hand and had to miss 14 games. In 2015, he scored a career-high of 48 points against the New Orleans Pelicans (which he broke a month later when he scored 49 points against the Philadelphia 76ers) and was named the All-Star MVP after scoring 41 points in the NBA All-Star game.

In January 2016, Westbrook and Kevin Durant were named Western Conference co-Players of the Month, and that year Westbrook started in the All-Star Game for the first time and was named MVP again. After Durant left the team, the Thunder wanted to ensure that they wouldn't lose Russell as well, so they offered him a 3-year, $85.7 million contract extension in August 2016. In March 2017, he broke his career-high yet again, scoring 58 points against the Portland Trail Blazers, and later that year, he received the NBA Most Valuable Player Award. In September 2017, Westbrook signed another contract extension with the Thunder, this time a 5-year, $205 million deal. In September 2018, he had another knee procedure, missing the preseason and the first two games of the regular season, and two months later, he sprained his left ankle and had to sit out five more games. In July 2019, the Thunder traded Russell to the Houston Rockets for Chris Paul, and he scored 24 points in his debut with the Rockets. 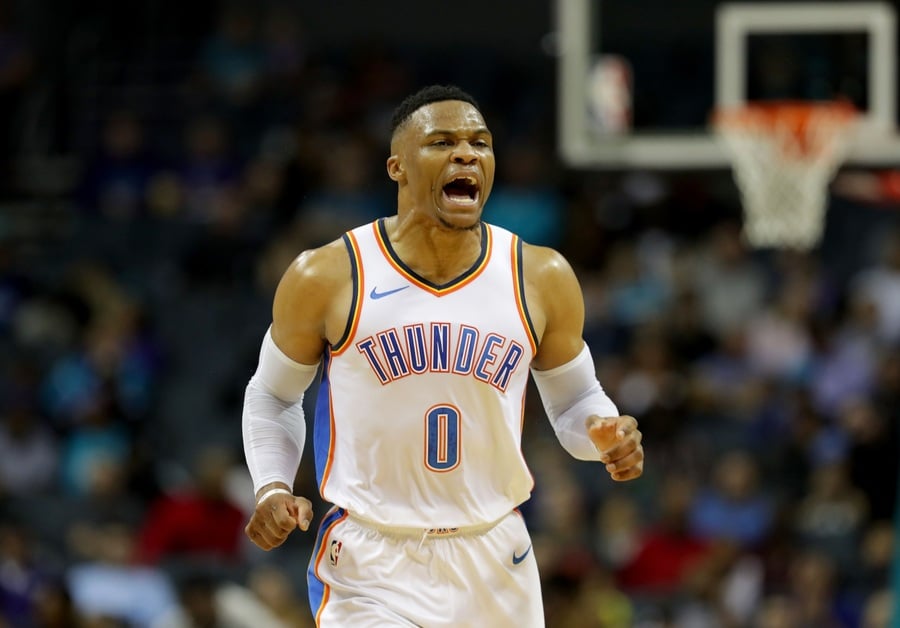 Russell married Nina Earl, a fellow UCLA basketball player who he began dating in college, on August 29, 2015, and they welcomed son Noah on May 16, 2017, and twin daughters Skye and Jordyn on November 17, 2018. Westbrook honors his late best friend, Khelcey, by wearing a "KB3" wristband and handwriting "KB3" on his sneakers; the Jordan Why Not? Zer0.3, part of Russell's signature sneaker series, features a "KB3" patch on each shoe. In July 2020, Westbrook tested positive for Coronavirus, and after complying with mandatory NBA quarantine protocol, he was able to return to practice on July 20th. 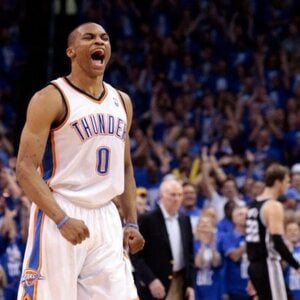