Rudy Gobert net worth and salary: Rudy Gobert is a French professional basketball player who has a net worth of $40 million. Rudy Gobert was born in Saint-Quentin, France in June 1992. He is a 7'1″ center who started his career for the Cholet Basket junior team. Gobert was drafted #27 by the Denver Nuggets in the 2013 NBA Draft and was traded on draft night to the Utah Jazz where he has played since 2013. He has also played with the Bakersfield Jam of the NBA Developmental League. In 2015 he finished third in the NBA Most Improved Player Award voting. Gobert has also represented France in international competition, and earned Bronze Medals at the 2014 World Cup and the 2015 EuroBasket. He also won a Bronze Medal at the 2011 FIBA Europe Under-20 Championship and a Silver Medal at the 2012 FIBA Europe Under-20 Championship.

On March 11, 2020 it was revealed that Rudy had tested positive for Coronavirus. His positive test caused a chain reaction that ultimately resulted in the entire NBA season being temporarily suspended. The day before his positive test became public, Rudy joked with reporters that he might be positive and playfully tested all of the microphones in the press room. In retrospect it was seen as highly ignorant and unprofessional. As a make-good, Rudy donated $500,000 to charity.

Contracts: In November 2016, Rudy signed a 4-year $102 million contract extension with the Utah Jazz. In December 2020 he signed a new extension, this one a 5-year $205 million deal. Interestingly he actually turned down an option to sign a "supermax" deal that would have paid roughly $20 million more than the deal he ultimately signed. 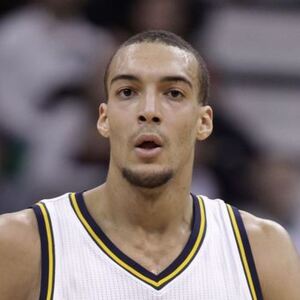