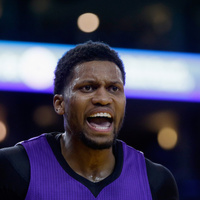 Rudy Gay net worth and salary: Rudy Gay is an American professional basketball player who has a net worth of $40 million. Rudy Gay has earned his net worth as American professional basketball player who has played for the Memphis Grizzlies, Toronto Raptors and Sacramento Kings. Gay was born on August 17, 1986 as one of five siblings who began playing competitive recreational basketball at the young age of 12 years old in the Turner Station community of Baltimore County, Maryland which is one the toughest youth basketball leagues in the area. Than at the age of 14 he began playing the nationally-known Cecil-Kirk AAU program under Coach Anthony Lewis. In the 2010 FIBA World Championship Gay won his first gold medal while averaging 7.0 points, 2.9 rebounds and 1.00 steals in 13.4 minutes in nine games for the undefeated Americans. Gay tied as the franchise's all-time steals leader (523 steals) against Shane Battier on January 31, 2012 while playing against the Denver Nuggets. In 2010 Gay helped Team USA win gold medal at the 2010 FIBA World Championship Gay helped the 2010 FIBA World Championship team win its first championship since 1994.