Roy Hibbert net worth and salary: Roy Hibbert is an American professional basketball player who has a net worth of $35 million and a 2017 salary of $14.9 million. Roy Hibbert currently plays center for the Indianapolis Pacers. Hibbert was born on December 11, 1986 in Queens, New York. His family moved to Maryland when Roy was two years old.

That same year his parents introduced him to the game of basketball. This was a smart move because Roy would eventually grow to be 7 feet 2 inches tall! Hibbert attended Georgetown University from 2004 – 2008. In 2008 Roy was drafted as the 17th pick in the first round by the Toronto Raptors but was immediately traded to the Indiana Pacers. His rookie year salary was $1.45 million. He signed a new $58 million contract with the Pacers in July 2013 that made him the 26th highest paid player in the NBA for the 2013 season with a salary of $13.668 million. 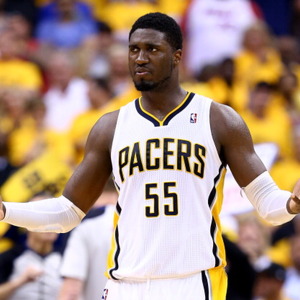