Ron Artest net worth and salary: Ron Artest is a retired American professional basketball player who has a net worth of $30 million. He is also known as "Metta World Peace" and "Metta Sandiford-Artest." During his career he played for six NBA teams and earned a reputation as a top defender in the league. He won an NBA championship with the Los Angeles Lakers in 2010. Additionally, Artest was known for many controversial incidents on court, including the Pacers-Pistons brawl in 2004. Artest was eventually suspended for 86 games due to his actions during the incident.

Early Life and Career Beginnings: Ron Artest Jr. was born in 1979 in the Queensbridge projects in Queens, New York. He has two younger brothers, Daniel and Isaiah. As a teenager, Artest played high school basketball at La Salle Academy in Manhattan.

In college, Artest played for St. John's University's Red Storm from 1997 to 1999. During the latter year, he led the team to a 14-4 record in the Big East Conference, and made it to the Elite Eight of the NCAA Division 1 Tournament.

Bulls and Pacers: Ron Artest was selected by the Chicago Bulls in the 1999 NBA draft. For nearly three years with the team, he played 175 games, mostly as a starter, and averaged 12.5 points per game. Halfway through the 2001-2002 season, he was traded to the Indiana Pacers.

Artest's frequently ornery behavior began to emerge during his tenure with the Pacers. In early 2003, he got into a verbal altercation with Pat Riley, head coach of the Miami Heat, and flashed a profane gesture toward the audience. As a consequence, he was suspended for four games. In November of 2004, an even larger-scale incident took place during a game between the Pacers and the Detroit Pistons. Ron was at the center of a large fight involving several players as well as spectators; the fight caused the game to be halted with less than a minute remaining. One day later, the NBA suspended him for the rest of the season, plus playoff games. Missing out on 86 games, it was the longest suspension for an on-court incident in the history of the NBA.

Kings and Rockets: In 2006, Ron was traded to the Sacramento Kings in exchange for Peja Stojaković. He found his place without much difficulty, leading the team to a 14-5 run early on. However, he was suspended from Game 2 of the team's first-round series against the Spurs due to elbowing Manu Ginóbili in the head. The Kings were eventually eliminated in six games.

He was traded to the Houston Rockets in the summer of 2008. During the playoffs, he helped the team advance past the first round for the first time in 12 seasons. However, his abrasive behavior came back to the fore, as he was ejected following an aggressive outburst in response to an offensive foul. In Game 3, he was ejected again after another foul.

Los Angeles Lakers: Ron found his greatest success with the Los Angeles Lakers, with which he signed a $33 million, five-year deal in 2009. At the 2010 Western Conference Finals, he made a game-winning buzzer-beating shot after grabbing a last-second offensive rebound in Game 5. In Game 6, he scored 25 points against the Suns, and subsequently made it to the NBA Finals for the first time in his career. The Lakers ultimately defeated the Celtics four games to three in the finals, with Artest scoring 20 points to clinch the victory. 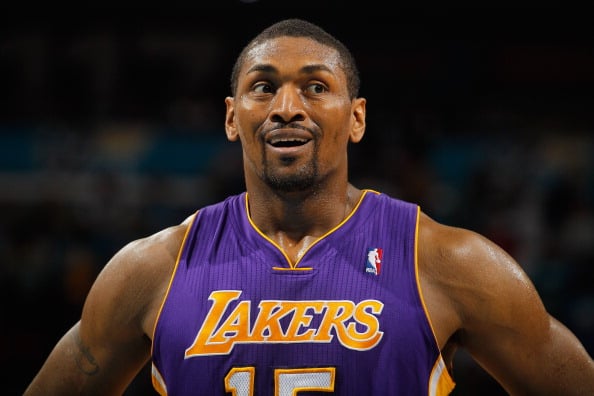 Artest began going by Metta World Peace during his final years with the Lakers. In 2012, he received a flagrant foul for elbowing James Harden in the head, and was ejected. A couple days later, he was suspended for seven games. However, it was a series of injuries that stymied Artest during the ensuing years. In early 2013, he suffered an injury to his right leg and right arm. A little later, he tore his left knee's lateral meniscus, and underwent surgery that sidelined him for about two weeks. Still, Artest managed to average his most points in four years, with 12.4 per game. He was subsequently waived by the team via the amnesty clause.

Knicks, Blue Whales, and Pallacanestro Cantù: Following his departure from the Lakers, Artest signed a two-year deal with the New York Knicks in July of 2013. However, in February of 2014, he was waived. Subsequently, Artest signed with the Chinese Basketball Association's Sichuan Blue Whales, with which he played 15 games. In 2015, he signed with Italy's Pallacanestro Cantù; at the end of the season, he was ejected from the game and charged with five fouls.

Return to the Lakers: Ron returned to the Lakers in September of 2015, and made his debut in a 104-98 win over the Brooklyn Nets in November. In April of 2017, he helped the Lakers extend its longest winning streak in four years by taking the team to a 108-96 victory over the Pelicans.

Television and Media Appearances: Beyond basketball, Ron has made a number of television appearances. He competed on the 13th season of the reality dance show "Dancing with the Stars," was a panelist on the Nickelodeon game show "Figure it Out," and played a newscaster on the Comedy Central sketch show "Key and Peele." In 2018, Artest was a contestant on "Celebrity Big Brother."

Personal Life: When he was 15, Ron Artest began an off-and-on relationship with 14-year-old Kimsha Hatfield. They had a child, Sadie, in 1997, and later had Ron III and Diamond. The pair married in 2003, and divorced in 2009. Artest has another son, Jeron, with former high school girlfriend Jennifer Palma. Currently, he is married to Maya Sandiford. 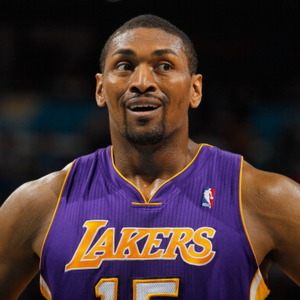