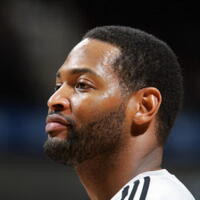 Robert Horry net worth: Robert Horry is an American former professional basketball player who has a net worth of $20 million dollars. Robert Horry was born in Hartford County, Maryland and grew up in Andalusia, Alabama. He was named Naismith Alabama High School Player of the Year while in high school, and he went on to play for the University of Alabama on a basketball scholarship. He received multiple sports honors while at Alabama, and set a school record for career blocked shots. The Houston Rockets drafted him in 1992 and he won his first two NBA Championships with the team in 1994 and 1995. He played for the Phoenix Suns from 1996-1997, but issues with the Suns' coach led to his being traded to the Los Angeles Lakers quickly. He played for the Lakers until 2003, winning three Championships while with the team. In 2003, he joined the San Antonio Spurs, and won two more NBA Championships with the Spurs, before retiring in 2008.