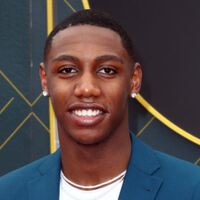 RJ Barrett net worth: RJ Barrett is a Canadian professional basketball player who has a net worth of $5 million. He is best known for his success in high school and at Duke.