Ricky Rubio net worth: Ricky Rubio is a Spanish professional basketball player who has a net worth of $8 million dollars. Ricard Rubio i Vives was born in El Masnou, Barcelona, Spain in October 1990. Rubio plays point guard in the NBA for the Minnesota Timberwolves. When he was 14 he became the youngest player to ever play in the Spanish ABC League. At 16 he debuted for Euroleague and was the first player to be born in the 1990s to play in the league. Rubio was drafted #5 by the Minnesota Timberwolves in the 2009 NBA Draft. This also made him the first 90s born player to be drafted in the NBA. Ricky did not join Minnesota until the 2011-12 season. From 2009 to 2011 he played for FC Barcelona. Rubio was named Mr. Europa in 2008. He was a three time FIBA Young Player of the Year from 2007 to 2009. In 2010 Rubio won the Euroleague championship and was the ACB Most Spectacular Player of the Year. He was selected to the NBA All-Rookie First Team in 2012. He plays for the Spanish national team and helped Spain win the FIBA Europe Under-16 Championship in 2006 and recorded a quadruple-double. He was named the Most Valuable Player of the tournament. He played for Spain in the 2008 Olympics where the team won the Silver Medal. 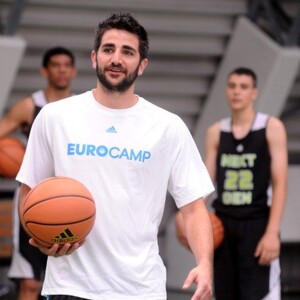