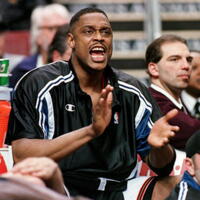 Rick Mahorn net worth: Rick Mahorn is a former professional basketball player and current NBA radio analyst who has a net worth of $4 million. Born in Hartford, Connecticut, in 1958 as Derrick Allen Mahorn, Rick Mahorn set 18 school records while playing basketball at Hampton University. He was selected in the second round (35th overall) by the Washington Bullets in the 1980 NBA Draft, and would play professionally for the next two decades. Mahorn played for the Bullets until 1985 when he joined the Detroit Pistons, where he'd win his only NBA championship in 1989. He went on to play for the Philadelphia 76ers before going overseas to an Italian team. When he returned, Mahorn played for the New Jersey Nets before returning to the Pistons and ultimately ending his career in 1999 with the 76ers. The power forward and center served as a coach in the CBA and WNBA until 2009 and is now a radio analyst for the Pistons. Mahorn has six children.