Rick Barry net worth: Rick Barry is an American former professional basketball player who has a net worth of $3 million. Rick Barry was born in Elizabeth, New Jersey in March 1944. He was a 6'7″ small forward who played for Roselle Park High School and was a Consensus first-team All-American and NCAA Division I scoring leader in 1965 at the University of Miami.

Barry was drafted #2 overall by the San Francisco Warriors in the 1965 NBA Draft. He played for the Warriors from 1965 to 1967 and then for the Oakland Oaks/Washington Caps from 1968 to 1970. Barry played for the New York Nets from 1970 to 1972 and for the Golden State Warriors from 1972 to 1978 before finishing his career with the Houston Rockets from 1978 to 1980. During his career Barry won an NBA championship in 1975 with the Warriors and an ABA championship in 1969 with the Caps. He was also named the NBA Finals MVP in 1975. Barry was a an eight time NBA All-Star and was the NBA All-Star Game MVP in 1967. He was selected to the All-NBA First Team five times and to the All-NBA Second Team once. He was the NBA Rookie of the Year in 1966, the NBA scoring champion in 1967, and the NBA steals leader in 1975. Barry's #24 was retired by the Golden State Warriors and he is a member of the NBA's 50th Anniversary All-Time Team. In 1987 he was inducted into the Naismith Memorial Basketball Hall of Fame. 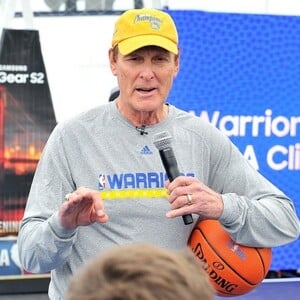