Richard Jefferson played college basketball under legendary coach Lute Olsen at the University of Arizona from 1998-2001. During his senior season, Richard Jefferson led the Wildcats to the 2001 NCAA National Championship game. He was inducted into the Pac-12 Basketball Hall of Honor in 2012. At 6'7″ and 230lbs, Richard Jefferson plays small forward. He was selected in the first round of the 2001 NBA draft with the 13th overall pick by the Houston Rockets. Richard Jefferson has played for the New Jersey Nets from 2001-2008, the Milwaukee Bucks from 2008-2009, the San Antonio Spurs from 2009-2012, the Golden State Warriors from 2012-2012, and as of 2013, plays for the Utah Jazz. He was chosen to be a part o the NBA All-Rookie second team in 2002 and was a member of the bronze medal winning USA Basketball team at the 2004 Athens Olympics. 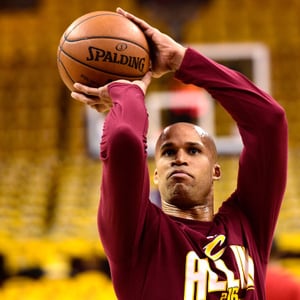