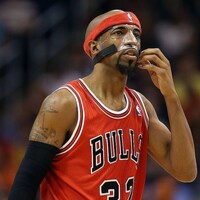 Richard Hamilton Net Worth: Richard Hamilton is an American professional basketball player who has a net worth of $50 million. Born in 1978 in Coatesville, Pennsylvania, Richard Hamilton played at the University of Connecticut from 1996 until 1999. UConn appeared in the national championship game, leading to Hamilton earning 1999 NCAA Tournament Most Outstanding Player honors. He was twice named Big East Player of the Year. The Washington Wizards chose Hamilton with the seventh overall pick during the 1999 NBA Draft. Hamilton made his rookie debut the same year, appearing in 71 games for the Wizards. He played with the team until his 2002 trade to the Detroit Pistons. Hamilton was part of the Pistons from 2002 until 2011 and was on the 2004 NBA Championship team. He was a three-time NBA All-Star with the Pistons in 2006, 2007, and 2008. In 2011, Hamilton landed a three-year, $15 million deal with the Chicago Bulls. He was eventually waived by the team during the summer of 2013 and he has not played since. As of the fall of 2014, Hamilton has not retired from professional basketball. He was part of the U.S. men's national basketball team that won gold at the 1999 FIBA Americas Championship in San Juan.