Rebecca Lobo net worth: Rebecca Lobo is an American television basketball analyst who has a net worth of $1.5 million. She is a former women's basketball player in the Women's National Basketball Association, and played the center position for much of her career. She was born on October 3, 1973 in Hartford, Connecticut and was raised in Southwick, Massachusetts.

She attended college at the University of Connecticut and helped lead the Huskies to the 1995 National Championship with an undefeated record of 35-0. In her senior year, she won the 1995 Naismith and College Player of the Year award, and was also awarded the prestigious Honda-Broderick Cup, which is presented to the athlete who is "most deserving of recognition as the Collegiate Woman Athlete of the Year. Lobo was also named the 1995 Sportswoman of the Year by the Women's Sports Foundation and was the first player in the Big East Conference ever to earn first team All American honors for both basketball and academics. She was a member of the 1996 Olympic team, and though her minutes were sparse on the floor, she shared the gold medal for Team USA's performance. In 1997, the WNBA was formed and Lobo was assigned to the New York Liberty during the leagues player allocations. In 1999, she suffered an injury to her left anterior cruciate ligament and was unable to play due to the injury. She was traded a few times but ultimately retired in 2003 from professional basketball. Today, she is a reporter and analyst for ESPN with a focus on women's college basketball as well as the WNBA. Lobo was inducted into the Women's Basketball Hall of Fame as part of the class of 2010 and her coaches spoke very highly of her impact both on and off the court. She is married to Sports Illustrated writer, Steve Rushin and the couple have four children (3 daughters and 1 son). 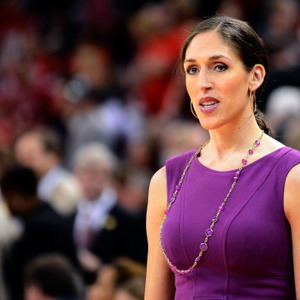