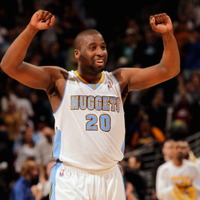 Raymond Felton Net Worth: Raymond Felton is an American professional basketball player who has a net worth of $15 million. Born Raymond Bernard Felton, Jr. on June 26, 1984, in Marion, South Carolina, he is a point guard with the New York Knicks of the National Basketball Association (NBA). Felton first got the chance to display his athletic talent at Latta High School in Latta, South Carolina. There, he was the key force to lead his high school team to two state championships, and thus earned a career record of 104–9. On a state level, he scored records with 2,992 points and 117,3 pointers in the process. Then, he went on to score even bigger and realize further his basketball talent at the University of North Carolina under head coach Roy Williams. While in college, Felton led the Tar Heels to a national championship before declaring for the NBA Draft. He got picked 5th overall in the 2005 NBA Draft by the Charlotte Bobcats. To date, Felton has played for several NBA teams, including the Charlotte Bobcats, New York Knicks (twice), Denver Nuggets, and Portland Trail Blazers.