How much is Ray Jackson Worth?

Ray Jackson net worth: Ray Jackson is an American former professional basketball player who has a net worth of $300 thousand. Ray Jackson was born in San Antonio, Texas in November 1973. Jackson was a 6'6″ shooting guard and small forward. He played his high school basketball at Lyndon B. Johnson High School and then attended the University of Michigan where he was part of the "Fab Five" for the Wolverines. Along with Chris Webber, Jalen Rose, Juwan Howard, and Jimmy King, Jackson reached the NCAA Men's Division I Basketball Championship games in 1992 and 1993. Those appearances were forfeited after a scandal where players were found to receive large amounts of money. Jackson did not play in the NBA but was cut in the preseason by the New York Knicks and Detroit Pistons. He was drafted by the Grand Rapids Hoops in the third round of the CBA Draft. Jackson played for the Hoops from 1995 to 1996 and was named CBA Rookie of the Year in 1996. Jackson runs a moving company and the non-profit organization Rise Up Inc. 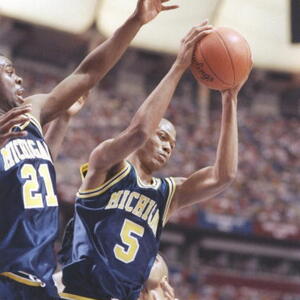