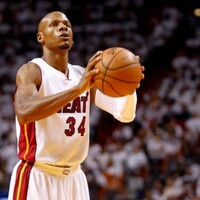 What is Ray Allen's net worth and salary?

Ray Allen is an American professional basketball player who has a net worth of $100 million. Allen is regarded as one of the best three-point shooters of all time. Ray played in the NBA from 1996 through 2014. He started with the Milwaukee Bucks, then played for the Seattle SuperSonics, Boston Celtics, finishing his career with the Miami Heat.

Walter Ray Allen, Jr. was born on July 20, 1975, at Castle Air Force Base, located in close proximity to Merced, California. Allen is the third out of five children — son of Walter Sr. and Flora Allen. With a father serving in the military, Allen spent his formative years in a variety of locations — Saxmundham, Suffolk, England, as well as Altus, Oklahoma, at Edwards Air Force Base (located in California), not to mention Germany. Allen and his family would eventually settle in Dalzell, South Carolina — long enough for Allen to attend high school, where he quickly excelled at a variety of sports. Allen had clear natural athletic gifts and an uncommon growth spurt led him to the sport of basketball. At age 15 Allen played for the Hillcrest High School varsity team. We would lead his team to a first-time state championship game and help execute a blow-out victory.

Allen went to the University of Connecticut (1993-1996) after being actively recruited. At UConn, Allen would be named USA Basketball's "Male Athlete of the Year" (1995). During Allen's final season with the Huskies he would be named first-team All-American. Allen also won the Big East Player of the Year award, ultimately finishing his college career as the Huskies' 3rd all-time leading scorer (1,922 points). Allen also recorded a single-season school record by hitting 115 three-pointers (1995–96).

Allen was drafted by the Minnesota Timberwolves as the fifth pick of the 1996 NBA Draft. However, immediately after Allen was selected, he (along with Andrew Lang) were exchanged in a trade, ending up on the Milwaukee Bucks. Both were traded for Stephon Marbury. Regardless of his beginnings in the league, Allen had a tremendously strong rookie season and was named as a part of the NBA All-Rookie Second Team. One notable game he scored 32 points against the Phoenix Suns.

During his professional career, Allen has played for a number of NBA teams, which includes the Milwaukee Bucks (1996–2003), Seattle Supersonics (2003–2007), Boston Celtics (2007–2012), as well as the Miami Heat (2012-2014). For the Celtics, Allen ended up tying the NBA Finals record, recording seven three-pointers in a Celtics victory (131–92 over the LA Lakers). Allen helped the Celtics add another banner to their rafters while securing his first NBA championship ring in the process. 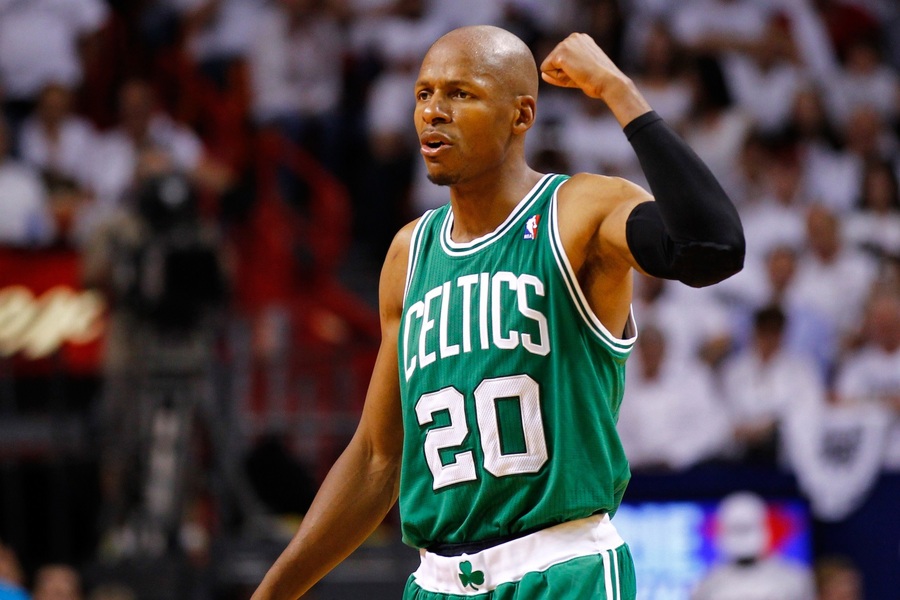 Allen also provided significant contributions as a shooter/scorer for the Miami Heat, playing alongside Dwayne Wade and Lebron James. Allen famously drained a clutch, game-tying 3-point shot with only 5.2 seconds left in the game, which ended up forcing a crucial overtime scenario. Allen's clutch shot helped the Heat win (103–100) over the San Antonio Spurs, which would force a game seven. The Heat ended up winning game seven of the 2013 NBA Finals with a score 95–88, which would be Allen's second ring and the Heat's second consecutive championship victory.

Over the years, Allen has turned into one of the most accurate 3-point and free throw shooters in NBA history. Furthermore, he is a ten-time NBA All-Star who has won two NBA championships, as well as an Olympic gold medal as a member of the 2000 United States men's basketball team.

In addition to being an award-winning NBA player regarded among the greatest pure shooters of all time, Ray Allen has also proved to be a winsome actor, starring in two feature films, including a lead role in the 1998 Spike Lee film "He Got Game" alongside Denzel Washington. Thanks to his character in the films, Allen was given the nickname "Jesus" and went on to make headlines by painting his toenails green and purple during the NBA playoffs. Off the basketball court, Allen has remained active as a philanthropist, creating the Ray of Hope Foundation, an organization which assists community charities.

n 2001, Allen was given the honor of being honorary captain of a 25-member UConn All-Century Basketball Team, which is no easy feat, considering how many iconic basketball players have come from Husky lineage. Allen himself ended up playing 18 seasons in the National Basketball Association (NBA) and was inducted into the Naismith Memorial Basketball Hall of Fame as a player in September 2018.

In 2014 Ray paid $11 million for an 11,500 square-foot house in Coral Gables, Florida. He previously rented the home after being traded to the Heat. The property has 10 bedrooms and sits on a private beach. Today this house is worth an estimated $14 – 20 million.

In 2017 the house immediately next door, which sits on a much larger lot and is 6,000 square-feet larger, was listed for sale for $45 million.