Rashard Lewis net worth and salary: Rashard Lewis is an American professional basketball player who has a net worth of $60 million. Rashard Lewis' peak salary was $22.1 million which made him one of the highest paid NBA players in the world. In 2007 Lewis signed a six year contract worth $118 million with The Orlando Magic but he finished his career as a member of the Miami Heat.

Rashard Lewis Net Worth:
Rashard Lewis wasborn in Pineville, Louisiana on august 8, 1979. He was recruited to play in college by Florida State, Kansas, and the University of Houston, but Lewis bypassed college and opted to enter the 1998 NBA Draft. Rashard Lewis was drafted by the Seattle Super Sonics with the third pick of the second round (32nd overall). He was the last of the 15 top draft prospects in the "green room" at the time of his selection. He had a solid career as a forward including two All-Star berths, in the 2004-2005 and in the 2008-2009 seasons. Lewis signed a six-year sign-and-trade deal worth $118 million on July 11, 2007 with the Orlando Magic. Lewis was the team's second leading scorer at the start of the 2008-2009 season, earning an appearance in the 2009 NBA All-Star Games. Lewis hit a game-winning shot in the first game of the Eastern Conference Finals against the Cleveland Cavaliers in the 2009 NBA Playoffs, what he called the biggest shot of his career. The Magic won the series and advanced to the NBA Finals, however the good times ended and they were defeated by the Los Angeles Lakers in five games. Over his 10-year career, Lewis holds an average of 16.8 points per game, with his career high of 22.4 points per game coming in 2006-2007 seasons; however he was suspended without pay for the first 10 games of the 2009-2010 season, on August 6, 2009, after he tested positive for a banned substance. Lewis was traded to the Washington Wizards for Gilbert Arenas on December 18, 2010. 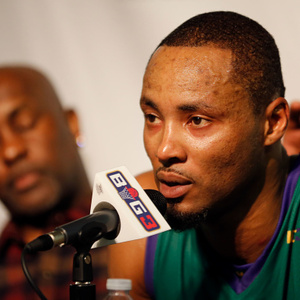