He was named both a Parade and McDonald's All-American his senior year. He went on to attend the University of North Carolina – Chapel Hill, where he set numerous records and won a handful of athletic honors. The Minnesota Timberwolves drafted him in 2005, amid high expectations. He struggled initially, but began to hit his stride in 2008. However, injuries and personal issues have plagued his professional league career, and after a brief stint with the Sacramento Kings and a season with the Texas Legends development team, he has spent most of his time playing overseas. He has played for Caciques de Humacao, Piratas de Quebradillas, the Powerade Tigers, and the Foshan Long Lions. He is currently signed with Uberlandia in Brazil. In June 2014, Rashad McCants stirred controversy when he claimed that while he was a student at UNC, the school and athletic department helped the best athletes cheat and inflate grades. He actually claimed that most of his papers and tests were written/taken by his school-provided tutors. He also claimed that UNC provided bogus classes that allowed students to maintain their academic eligibility. 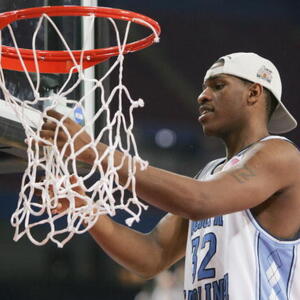