Nesterovic played with the Timberwolves until 2003 when he joined the San Antonio Spurs until 2006. Nesterovic went on to play with the Toronto Raptors from 2006 until 2008, the Indiana Pacers from 2008 until 2009, and the Toronto Raptors a second time from 2009 until 2010. During the 2010-2011 season, Nesterovic returned to Greece to play with Olympiacos. He was part of the 2005 San Antonio NBA Championship-winning team. It was the second title of Nesterovic's career; he was also part of the Kinder Bologna team that won the 1998 European Championship. Nesterovic finished his NBA playing career with 5,519 points, 4,143 rebounds, and 934 blocks. He captained the Slovenian men's national basketball team until 2008 when he retired from the squad. Off the court, Nesterovic is the father of three children. 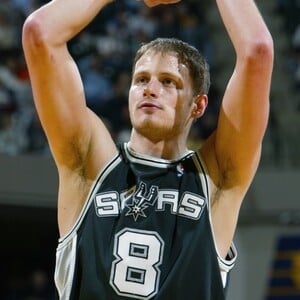