Quinn Buckner net worth and salary: Quinn Buckner is an American former professional basketball player and coach who has a net worth of $2 million. Quinn Buckner was born in Phoenix, Illinois in August 1954. He was a 6'3″ point guard who played at Thornridge High School. Buckner is the only person who has ever been named Chicago area Player of the Year in both basketball and football.

He played college basketball at the University of Indiana where he won an NCAA Championship in 1976. Buckner also competed for the United States in international competition winning a Gold medal at the 1976 Montreal Olympics and a Bronze at the 1974 FIBA World Championship in Puerto Rico. He was drafted #7 by the Milwaukee Bucks in the 1976 NBA Draft and played for Milwaukee until 1982. He then played for the Boston Celtics from 1982 to 1985 and finished his career with the Indiana Pacers from 1985 to 1986. Buckner won an NBA Championship with the Celtics in 1984. He was a four time NBA All-Defensive Second Team selection. Buckner was the head coach of the Dallas Mavericks from 1993 to 1994. He has also worked as a broadcaster for ESPN and NBC as well as CBS Sports. He is a color commentator for the Indiana Pacers and serves as Vice President of Communications for Pacers Sports & Entertainment. 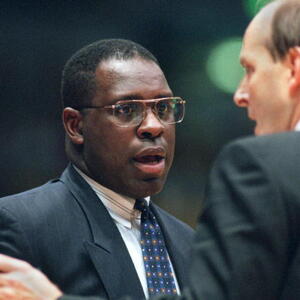