Peja Stojaković net worth and salary: Peja Stojaković is a former professional basketball player who has a net worth of $45 million. Peja Stojaković played professional basketball from 1992 – 2011 and was known for his great shooting ability. He was the winner of the NBA All-Start Weekend Three-Point Shootout twice, and was the first European-born player to win one of the All-Star Weekend competitions. He is sixth overall in all-time regular season three-point shots made in the NBA. In addition to his shooting ability, fans would say that he passed beautifully, rebounded well, and played solid defense. Pedrag Stajoković was born on June 9, 1977 in Slavonska Požega, SR Croatia, SFR Yugoslavia, but his family fled to Belgrade during the Yugoslav wars. He stands 6 feet, 10 inches tall and weighs 229 pounds. Stojaković started his career in KK Crvena zvezda (FR Yugoslavia) for two senior seasons, and won the national championship. He then moved to Greece where he played for the team PAOK and was nicknamed Peja. He played for the team from 1994-1998 and during this time, he received Greek citizenship and served in the Greek Army, which is an obligation of all male citizens of Greece.

Peja Stojaković was drafted in 1996 by the Sacramento Kings; he was chosen in the first round and fourteenth overall. He sat on the bench for the first two years but had a breakthrough season from 2000-2001 and finished second in voting for the 2001 Most Improved Player Award. Stojaković enjoyed success with the Kings, and in 2002 the team reached the Western Conference finals. In January of 2006, Peja Stojaković was traded to the Indiana Pacers in exchange for Ron Artest, ending his eight-year tenure with the Kings. During the 2006 offseason, he re-signed with the Pacers only to be traded shortly thereafter to the New Orleans/Oklahoma City Hornets for the draft rights to Andrew Betts. In November of 2006, Stojaković scored a career high, 42-points against the Charlotte Bobcats, and became the first NBA player in history to open the game with 20 straight points for his team. Shortly thereafter, he was sidelined for months due to injuries, primarily a back injury, that caused him to miss most of the 2006-2007 season. In November of 2010, Peja Stojaković was traded to the Toronto Raptors along with Jerryd Bayless. After missing all but two games due to a left knee injury, he was released from the Raptors in January of 2011. A few days later, he signed a deal with the Dallas Mavericks where he had a successful run, contributing to the team winning the NBA Championship that year. On December 19, 2011, Peja Stojaković announced his retirement due to ongoing back and neck problems. Peja Stojaković is married to a Greek model named Aleka Kamila and has two children. 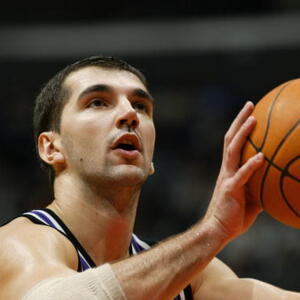