What is Pau Gasol's Net Worth?

Pau Gasol is a retired professional basketball player from Spain who has a net worth of $120 million. Pau, a six-time NBA All-Star, played for the Memphis Grizzlies, Los Angeles Lakers, Chicago Bulls, and San Antonio Spurs, winning two consecutive NBA championships with the Lakers. Internationally, Gasol has racked up numerous honors, including Olympic medals, a FIBA World Cup title, and three EuroBasket titles.

During his NBA career, Pau Gasol earned $225 million in salary alone. At the peak of his career in 2013/2014, Pau earned $19 million per season from the Lakers.

Pau Gasol was born on July 6, 1980 in Barcelona, Spain to Marisa, a medical doctor, and Agustí, a nurse administrator. Both of his parents played basketball in organized leagues. He has two younger brothers named Marc and Adrià. Although he started out playing rugby as a youth, Gasol soon switched to basketball. However, he did not originally intend to pursue a career in sports. Upon hearing about Magic Johnson's HIV diagnosis in 1991, the 11-year-old Gasol decided he wanted to be a doctor and find a cure for the disease. Consequently, as a young adult, he enrolled in medical school at the University of Barcelona. Ultimately, he left after one year as his career at FC Barcelona was taking off.

Early on in his playing career, Gasol signed with Cornellà. At the age of 16, he started playing for the junior team of FC Barcelona. With Spain's national under-18 team, he won both the Albert Schweitzer Tournament and the FIBA Europe Under-18 Championship in 1998. The next year, he made his debut on the senior team of FC Barcelona. When the team won the Spanish National Cup in 2001, Gasol was named the MVP of the tournament.

In the 2001 NBA draft, Gasol was chosen by the Atlanta Hawks, which immediately traded him to the Memphis Grizzlies. In his debut season with the Grizzlies, Gasol became the first-ever foreign player to win NBA Rookie of the Year honors. He went on to lead the team in scoring during his second year, and in 2003, helped the Grizzlies make it to the NBA playoffs for the first time in franchise history. The team made it to the playoffs again in 2005.

In his fifth year with the Grizzlies, Gasol became the franchise's all-time leading rebounder, and helped lead the team to its third playoffs appearance. Gasol went on to earn a number of other distinctions. In 2006, he became the first Spanish player and the first Grizzlies player to make an All-Star Game. He also became the all-time franchise leader in both field goals and minutes played. 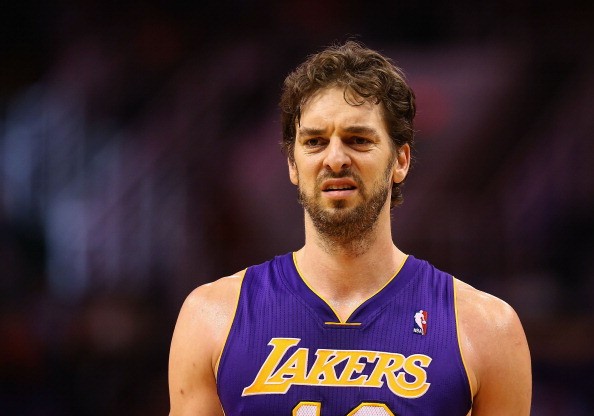 Gasol was traded to the Los Angeles Lakers in February of 2008. In his first game, he scored 24 points in a 105-90 win over the New Jersey Nets. The Lakers went on to make it to the playoffs, where they swept the Denver Nuggets in the first round. The team then beat the Utah Jazz to advance to the conference finals, and defeated the San Antonio Spurs to make it to the NBA Finals. Ultimately, the Lakers fell to the Boston Celtics in six games. Better success came the next season, when the Lakers won the NBA championship over the Orlando Magic to give Gasol his first championship title.

He and the Lakers repeated their success the very next season, winning the championship in seven games over the Boston Celtics. The following year, however, the Lakers were swept by the Dallas Mavericks in the second round of the playoffs, and Gasol had the worst post-season of his career.

Gasol continued to struggle during the 2012-13 season under new Lakers head coach Mike D'Antoni. He was also beset by tendinitis in both knees as well as plantar fasciitis. In January of 2013, he suffered a concussion after being hit by JaVale McGee in the fourth quarter of a 112-105 defeat. Shortly after returning to the lineup, he tore his right foot's plantar fascia, causing him to miss yet more games. Gasol ended up finishing the season with career lows in points and field-goal percentage.

In July of 2014, Gasol signed with the Chicago Bulls. He found renewed success on the team, recording a career-high 46 points in a 95-87 win over the Milwaukee Bucks in January of 2015. He went on to score multiple double-doubles and triple-doubles, and became the 38th NBA player to reach 10,000 career rebounds.

Gasol signed with the San Antonio Spurs in 2016, and was released in a buyout agreement in 2019. Subsequently, he signed with the Milwaukee Bucks, with which he played three games before suffering a season-ending ankle injury. Next, Gasol signed with the Portland Trail Blazers, but was waived without having played any games. In February of 2021, he returned to Spain to briefly play for FC Barcelona, before officially retiring in October.

On the Spanish national basketball team, Gasol first competed in the 2001 EuroBasket tournament, where he won the bronze medal. He went on to have enormous success with the Spanish team, winning the 2006 FIBA World Championship and the 2009 and 2011 EuroBasket tournaments. In 2017, Gasol became the all-time leading scorer in FIBA EuroBasket history. Among his other honors, he won silver medals at the Summer Olympics in 2008 and 2012, and a bronze medal in 2016.

In 2019, Gasol wed Catherine McDonnell. The next year, they had a daughter named Elisabet. In his free time, Gasol likes to read historical novels, play the keyboard, and attend operas and concerts.

Gasol is heavily involved in philanthropic endeavors. After being named a UNICEF ambassador in 2003, he started participating in numerous campaigns focused on infant survival, nutrition, and children's rights in Africa. He has also worked with such organizations as Saint Jude Children's Research Hospital and Spain's Fundación Atresmedia.