Patrick Ewing Net Worth: Patrick Ewing is a Jamaican-American (retired) basketball player who has a net worth of $75 million. Patrick Ewing played for most of his career as the starting center for the New York Knicks. He also won Olympic gold medals as part of the men's Olympic basketball teams in 1984 and 1992, and ended his playing career with the Seattle SuperSonics and Orlando Magic in the early 2000s. Having played for Georgetown as a collegiate athlete, Ewing went on to become that school's head coach.

Career Earnings: During his NBA career he earned $125 million in salary alone.

Early Life and College Career: Patrick Ewing was born in 1962 in Kingston, Jamaica. He moved to Cambridge, Massachusetts in 1975, and learned to play basketball at Cambridge Rindge and Latin School. With only a few years of playing experience under his belt, he eventually became one of the top high school players in the nation.

Making a controversial decision to leave Massachusetts, Ewing ultimately decided to play college basketball at Georgetown University. During his freshman year in the 1981-82 season, Ewing became one of the first college freshmen to start on the varsity team. He ended up leading the Georgetown Hoyas to their second Big East Tournament in school history, as well as a #1 seed in the NCAA Tournament. In the tournament, Georgetown advanced to the Final Four, the first time it had done so since 1943. Ewing and his team went on to appear in the NCAA Tournament over each of the following three years. In the final of the 1983-84 season, Georgetown beat the University of Houston to win its first NCAA Championship in school history. For Ewing's final season, the team once again won the Big East tournament title. Overall, Ewing's college playing career is widely considered to be among the most successful of all time.

New York Knicks: In the 1985 NBA draft, Ewing was drafted by the New York Knicks, signing him to a 10-year, $32 million contract. Despite suffering many injuries during his first year, he was voted NBA Rookie of the Year and named to the NBA All-Rookie First Team. In 1993, Ewing led the NBA with 789 defensive rebounds. The next year, he helped the Knicks make it to the NBA Finals for the first time in over 20 years. During the playoff run, he set a record for most blocked shots in a Finals series, and set another record for most blocked shots in a single game, with eight. In 1997, Ewing's career almost ended when he was severely injured after a fall on the court. He suffered a damaged wrist, a dislocation of his lunate bone, and torn ligaments. As a result, Ewing missed 56 games of the season.

For Ewing's final season with the Knicks in 1999-2000, the team finished as the third seed in the East. It advanced to the Conference Finals, and swept the Toronto Raptors; however, the Knicks fell to the Pacers in six games. Among the notable achievements of his final year, Ewing made a game-winning slam dunk in Game 7 of the Eastern Conference Semifinals. He also notched his 1,000th NBA game, finishing his Knicks career with a franchise record of 1,039 games played. Additionally, Ewing was named an NBA All-Star eleven times, was once named to the All-NBA First Team, was six times a member of the All-NBA Second Team, and was thrice named to the NBA All-Defensive Second Team. 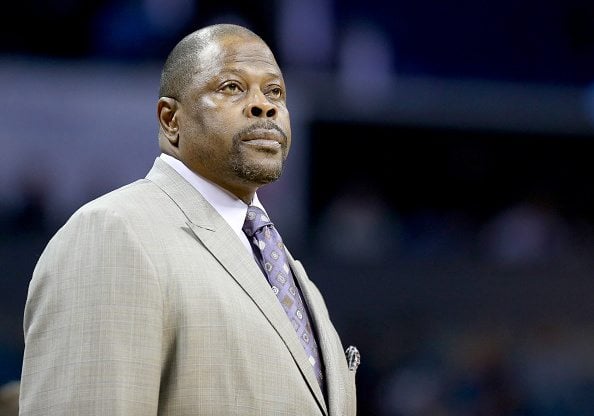 Olympic Career: Ewing made his debut at the Olympics in the 1984 Los Angeles games. There, he competed for the United States on a team that included Michael Jordan, Joe Kleine, Chris Mullin, Sam Perkins, Leon Wood, and Wayman Tisdale. The team went 8-0 in the Olympic tournament, averaging 95.4 points per game and winning the gold medal. Ewing returned to the Olympics in 1992 in Barcelona, where he was a member of the legendary "Dream Team," the first American Olympic team to feature active professional NBA players. Undefeated throughout the tournament, the team went on to win another gold for the United States.

Post-Knicks: Ewing left the Knicks in 2000, when he was traded to the Seattle SuperSonics. After a year with the team, he was traded to the Orlando Magic, and subsequently took a position as an assistant coach for the Washington Wizards. Ewing announced his retirement in 2002.

In 2017, Ewing was hired as the head coach of his college alma mater team, the Georgetown Hoyas. Although his first season ended without any postseason tournament play, in his second season Georgetown finished in third place in the Big East, and was awarded a bid into the National Invitational Tournament. In his fourth season, Ewing led the Hoyas to the 2021 Big East Conference Tournament as the eighth seed. The team defeated the first-seeded Villanova in the quarterfinals, and defeated the second-seeded Creighton in the championship game to qualify for the NCAA Division 1 Tournament.

Personal Life and Media: Ewing was wed to Rita Williams from 1990 to 1998. He has three children, including NBA player Patrick Ewing Jr., whom he had with Sharon Campbell.

Beyond his playing career, Ewing has made several media appearances as himself. He was in the 1996 sports comedy "Space Jam," and also had cameos in television sitcoms such as "Spin City," "Mad About You," "Webster," and "Herman's Head." 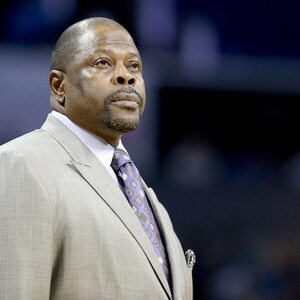