What is Pat Riley's Net Worth and Salary?

Pat Riley is an American professional basketball executive, as well as a former coach and player in the NBA who has a net worth of $120 million. He is perhaps best known as the former head coach of the Miami Heat, a position that he held from 1995 until 2003 before once again coaching the team from 2005 to 2008. He also experienced considerable success with the Los Angeles Lakers during their "Showtime Era." Over the course of his coaching career, Riley has won five NBA championships. These achievements have led many experts to call him one of the greatest NBA coaches of all time.

Prior to his coaching career, Riley was also an accomplished player in the NBA. Today, he is best known as an executive. This wide range of roles within the NBA have allowed him to win a championship as a player, an assistant coach, as an executive, and as head coach. He was the first North American sports figure to accomplish this feat. In 2012, he was given the Chuck Daly Lifetime Achievement Award from the NBA Coaches Association.

Patrick James Riley was born on March 20th of 1945 in Rome, New York. Raised in Schenectady, Pat's father was Leon Riley, a minor league baseball player who played in four games for the Philadelphia Phillies. During his high school years, Pat proved his potential as a basketball player and also played on the football team. He continued to play both football and basketball in college while attending the University of Kentucky.

By the time he had graduated high school, he was drafted by both the San Diego Rockets of the NBA and the Dallas Cowboys of the NFL. Although he could have pursued a career as a wide receiver, he opted instead for a life on the basketball court and joined the Rockets. During his playing career, he was eventually traded to the Los Angeles Lakers. In 1972, he helped the Lakers win the NBA Championship. Pat eventually finished his playing career after the 1975-76 season as a member of the Phoenix Suns. 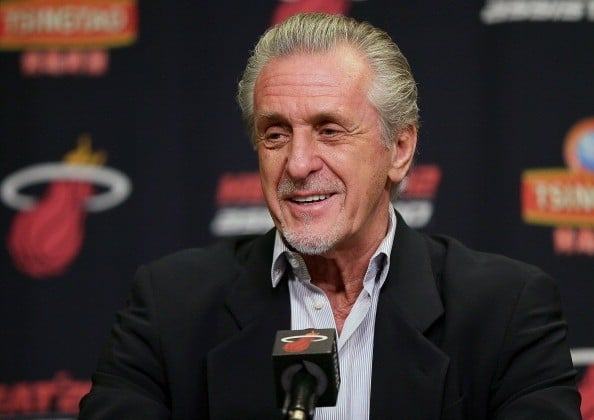 After a near-fatal bike accident injured Lakers coach Jack McKinney, Riley was called in to act as assistant coach to Paul Westhead. That year, the Lakers won the 1980 NBA Finals. Although the team failed to reach the playoffs next season, Riley was named head coach shortly afterwards and made a name for himself with his Armani suits and slicked back hair. This was the beginning of the "Showtime" era.

Riley stepped down as Lakers coach and joined the New York Knicks in 1991. He then resigned from the Knicks in 1995 to become the head coach of the Miami Heat. This tenure was slightly questionable, and Pat stepped down from the position in 2003. By 2005, Pat rejoined the team as head coach and managed to win the championship for the fifth time as a coach in 2006. He then became president of Miami Heat.

Back in 1988 when Pat was coaching the Lakers, the team entered the NBA finals looking to secure their third straight championship. The phrase "three-peat" was a rallying cry in Laker nation. Unfortunately the three-peat did not end up happening when the Lakers were swept in four games by the Pistons. There was a silver lining for Pat Riley.

In November 1988, Riley submitted an application to trademark the term "three-peat" through his corporate entity "Riles & Co.". A few months later the application was approved and trademark #1552980 was granted. This meant that anytime someone used that phrase commercially, they would have to pay Pat Riley a licensing royalty.

A few years later when the Chicago Bulls pulled off TWO three-peats, Pat Riley made a fortune in royalty fees. In 1993, Riles & Co. earned an estimated $300,000 in licensing and royalty fees. In 1998 the royalty income doubled to nearly $600,000. Riles & Co has cashed in on dozens of other three-peat occurrences. Even Riley's own Lakers finally pulled off the feat between 2000 and 2002.

In 2012, it was reported that Riley had sold his mansion in Miami for $16.75 million. The five-bedroom home sits on 2 acres, and it features more than 900 linear feet of water frontage. It was originally listed for a much higher sum – $23 million – but Pat was apparently content to accept a 25% reduction in the price. He and his wife originally purchased the home back in 1996 for $6.3 million, so this represents a major profit margin however you look at it. The couple reportedly started living in a nearby Miami home after the sale was completed. The new buyer announced plans to demolish the entire mansion in 2013, shortly after purchasing it.

In 2014, Pat reportedly listed two homes in Malibu for rent. Both bungalow-style residences were situated in the private enclave of Broad Beach, and they offer tenants access to beachfront property and stunning views of the ocean. However, renting these homes is anything but cheap. One home was put on the rental market for $18,500 per month, while the other had a rental fee of $16,500 per month.

One of these homes features 1,386 square feet of living space, three bedrooms, a fireplace, and an office. This is the most expensive of the two homes, and Riley originally purchased it in 1989 for $1.6 million. The less expensive rental option provides 2,788 square feet of living space with four bedrooms. He originally purchased this home in 2000 for $2.5 million. He owns a third home in the same gated neighborhood, which he purchased in 2007 for $7 million. However, this home was not rented out. It's worth mentioning that during peak months, these homes can be rented out for as much as $35,000 per month.

In 2019, Pat Riley apparently invested in a new condo in Miami. He and his wife paid $8 million for the residence, which lies in the Four Seasons Residences building at the Surf Club in Surfside. The new condo was purchased directly from the developer, Fort Partners. Spanning 3,948 square feet of living space, this condo features four bedrooms. Many other high-profile celebrities have purchased condos in this exclusive building. Pat and his wife also continue to own a home in the Apogee building in South Beach. 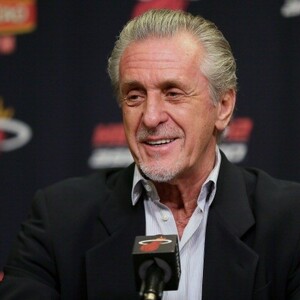