Pascal Siakam net worth: Pascal Siakam is a Cameroonian professional basketball player who has a net worth of $20 million. He is probably best known for winning an NBA Championship with the Toronto Raptors.

Pascal Siakam was born in Douala, Cameroon in April 1994. He is a 6'9″ power forward. Siakam moved to the United States and attended God's Academy in Lewisville, Texas. He played his college basketball at New Mexico State where he was named Western Athletic Conference Player of the Year in 2016 after being WAC Freshman of the Year in 2015. Pascal Siakam was also named an AP Honorable mention All-American in 2016. He was drafted #27 overall by the Toronto Raptors. Siakam also played for the NBA D-League team Raptors 905 in 2017. He was a D-League champion and D-League Finals MVP. Pascal Siakam was named the NBA Most Improved Player in 2019 and also won the NBA Championship with the Toronto Raptors. In 2020 he was named an NBA All-Star starter. In 2019 Siakam signed a four year deal for $130 million with the Toronto Raptors. 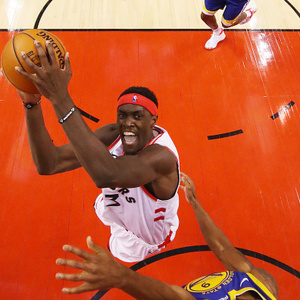