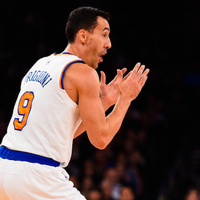 Pablo Prigioni Net Worth: Pablo Prigioni is an Argentine-Italian professional basketball player who has a net worth of $2 million. Pablo Prigioni was born in Rio Tercero, Cordoba, Argentina in May 1977. Prigioni is a 6'3″ point guard who started his professional career for Ramallo in Argentina in 1995. He played there until 1996 when he joined Belgrano San Nicolas until 1998. Prigioni then played for Obras Sanitarias from 1998 to 1999. He then started playing in Spain for Fuenlabrada from 1999 to 2001, Lucentum Alicante from 2001 to 2003, Tau Cermanica from 2003 to 2009, Real Madrid from 2009 to 2011, and Caja Laboral from 2011 to 2012. During the 2005-06 season Pablo led the Euroleague in assists. He was named the Spanish King's Cup MVP in 2006 and the Spanish Supercup MVP in 2008. Prigioni was also a two time All-Euroleague Second Team member. In 2012 he signed a one year deal with the New York Knicks for the rookie minimum. He re-signed with the Knicks in July 2013. Prigioni has also competed internationally for Argentina and won Gold medals at the 2004 South American Championship and the 2011 FIBA Americas Championship. He also won a Bronze medal at the 2008 Beijing Summer Olympic Games.