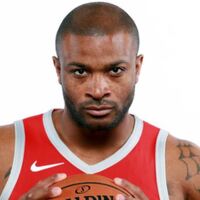 P.J. Tucker net worth: P.J. Tucker is an American professional basketball player who has a net worth of $30 million. P.J. Tucker was born in Raleigh, North Carolina in May 1985. He is a 6'5″ small forward and power forward who played at William G. Enloe High School. Tucker played his college basketball for Texas where he was on the Big 12 All-Freshman Team in 2004 and the Big 12 Player of the Year in 2006 when he was a consensus second-team All-American. P.J. Tucker was drafted #35 overall by the Toronto Raptors in the 2006 NBA Draft. He played with the Raptors from 2006 to 2007. Tucker played overseas before playing for the Phoenix Suns from 2012 to 2017. He also played for the Toronto Raptors in 2017 and joined the Houston Rockets the same year. P.J. Tucker was a Ukrainian SuperLeague All-Star in 2009 and a BBL All-Star in 2012. He was the Israeli Super League MVP in 2008 and a League champion. In 2012 he was a BBL Champion and BBL Finals MVP.