P.J. Brown Net Worth: P.J. Brown is a retired American professional basketball player who has a net worth of $26 million. Born in Detroit, Michigan, in 1969, P.J. Brown played college basketball at Louisiana Tech. He was inducted into the Louisiana Tech Athletic Hall of Fame. The New Jersey Nets chose Brown with the 29th overall pick during the second round of the 1992 NBA Draft.

Brown made his pro debut in 1992 with Panionios in Greece before playing with the Nets from 1993 until 1996. He later played with the Miami Heat, the Charlotte (and later New Orleans) Hornets, the Chicago Bulls, and, lastly, the Boston Celtics in 2008. Brown won an NBA Championship in 2008. He was named to the NBA All-Defensive Second Team three times in 1997, 1999, and 2001, and won the NBA Sportsmanship Award in 2004. Brown finished his career with 9,870 points, 8,409 rebounds, and 1,116 blocks. Brown is the only player who has ever been on the Hornets roster in all three cities that the team has been in: the Charlotte Hornets, the New Orleans Hornets, and the Oklahoma City Hornets. He starred in the movie "Romance & Cigarettes" as a police officer, and is married to his wife, Dee. They have four children together: three daughters and one son. 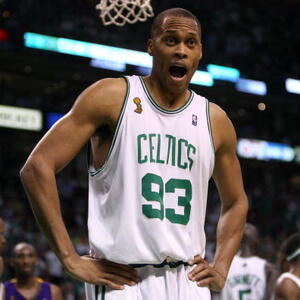