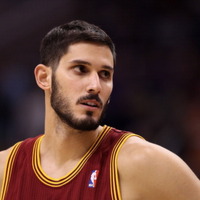 Omri Casspi net worth and salary: Omri Casspi is an Israeli professional basketball player who has a net worth of $8 million dollars. Omri Moshe Casspi was born in Holon, Israel in June 1988. He played as a child and won the State Youth Championship in 2005. His professional career started out in 2005 for Maccabi Tel Aviv. He won the Israeli Cup in 2006, the Discovery of the Year award in 2007, was named ISL Sixth Man of the Year in 2008, and made the All ISL Team in 2009. He won the Israeli Super League Championship in 2006 and 2009. Casspi represents Israel in international competition. Omri was drafted #23 by the Sacramento Kings in the 2009 NBA Draft. That made him the first Israeli player to be selected in the first round. He also became the first Israeli player to play in an NBA game. He played for Sacramento from 2009 to 2011 and then was traded to the Cleveland Cavaliers. He signed with the Houston Rockets in 2013 and played for one season. In July 2014 Casspi was part of a three team trade that sent him to the New Orleans Pelicans. During his first five seasons in the NBA Casspi averaged 7.7 points per game and 3.8 rebounds per game.