Nikola Jokic net worth: Nikola Jokic is a Serbian professional basketball player who has a net worth of $30 million. Nikola Jokic was born in Sombor, Serbia, FR Yugoslavia in February 1995. He is a 7'0″ center who first played for Mega Leks from 2012 to 2015. Jokic was drafted #41 overall by the Denver Nuggets in the 2014 NBA Draft.

He joined the Denver Nuggets in 2015. Jokic was the Adriatic League MVP and an ABA League Top Prospect in 2015. In 2016 he was named to the NBA All-Rookie First Team. Jokic was named the Serbian Player of the Year in 2018. He has also representing Serbia in international competition and won silver medals at the 2013 under-19 World Championship and the 2016 Summer Olympics. Nikola Jokic signed a maximum contract extension with the Nuggets in 2018 for $148 million for five years. He was the tournament MVP at the 2016 FIBA World Olympic Qualifying Tournament. 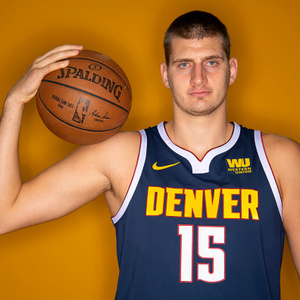