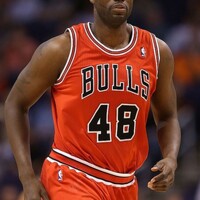 Nazr Mohammed Net Worth: Nazr Mohammed is an American professional basketball player who has a net worth of $25 million. Born in Chicago, Illinois in 1977, Nazr Mohammed grew up in the Windy City before playing basketball at the University of Kentucky from 1995 until 1998. He was part of two NCAA Championship-winning teams with the Wildcats in 1996 and 1998. The Utah Jazz selected Mohammed with the 29th overall pick during the first round of the 1998 NBA Draft. He was immediately traded to the Philadelphia 76ers, where he played until 2001. Mohammed then played with the Atlanta Hawks from 2001 until 2004, the New York Knicks from 2004 until 2005, the San Antonio Spurs from 2005 until 2006, the Detroit Pistons from 2006 until 2007, the Charlotte Bobcats from 2007 until 2011, the Oklahoma City Thunder from 2011 until 2012, and the Chicago Bills from 2012 until the present (currently fall of 2014). Mohammed won the 2005 NBA Championship with the San Antonio Spurs. He has appeared in 80 postseason games, though he never came close to repeating as NBA champ. Mohammed averaged 7.1 points per game during the Spurs' title run, appearing in 23 games. Mohammed has attracted attention at times for fasting for his Muslim faith; he reportedly lost close to ten pounds during one season as a result of observing Ramadan.