Nancy Lieberman net worth: Nancy Lieberman is an American broadcaster and former professional basketball player who has a net worth of $3 million. Nancy Lieberman was born in Brooklyn, New York in July 1958. She was a 5'10" point guard who played at Far Rockaway High School. Lieberman played her college basketball at Old Dominion where she won the Honda-Broderick Cup for all sports and was a two time Honda Sports Award winner for basketball.

Nancy Lieberman was drafted #15 overall in the 1997 WNBA Draft by the Phoenix Mercury. She formerly played for the Dallas Diamonds, the Springfield Fame, and the Long Island Knights in various league. Lieberman played for the Phoenix Mercury in 1997 and for the Detroit Shock in 2000 and 2008. She coached the Detroit Shock from 1998 to 2000 and also coached the Texas Legends from 2009 to 2011 and was an assistant coach for the NBA's Sacramento Kings from 2015 to 2017. Nancy Lieberman represented the United States in international competition and won a silver medal at the 1976 Montreal Olympic Games. She has been the head coach of the team Power in the BIG3 league and is a member of the Basketball Hall of Fame and the Women's Basketball Hall of Fame. 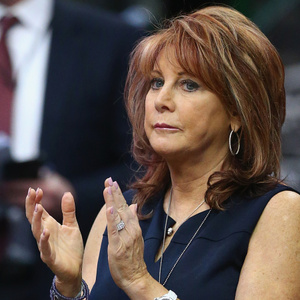