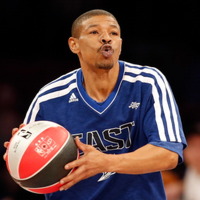 What is Muggsy Bogues' Net Worth and Career Earnings?

Muggsy Bogues is a retired American basketball player, most well known as being "the shortest guy" in the NBA. Muggsy Bogues has a net worth of $14 million. Bogues was the shortest player to ever play in the NBA, measuring at 5 ft 3 in. By comparison, the average height of an NBA player is 6 ft 7 in.

Muggsy Boguese's career in the NBA lasted for 14 seasons, where he played for 4 teams as a point guard. For ten of those seasons, he played with the Charlotte Hornets, which was the most well-known period of his career. He also played for the Washington Bullets, Golden State Warriors, and Toronto Raptors.

During his career Muggsy Bogues earned around $18 million in salary alone. After adjusting for inflation, that's the same as around $34 million in today's dollars. Muggsy earned several million more from endorsements.

In his rookie year, Muggsy Bogues, the shortest player in NBA history, was a teammate of Manute Bol, one of the tallest players in NBA history. At 7 foot 7, Manute was 2 feet 4 inches (28 total inches) taller than Muggsy.

Contrary to popular legend, Muggsy Bogues could not dunk. He could however touch the rim which is a fairly impressive feat on its own.

Here is a photo of Muggsy and Manute standing side-by-side in 1987: 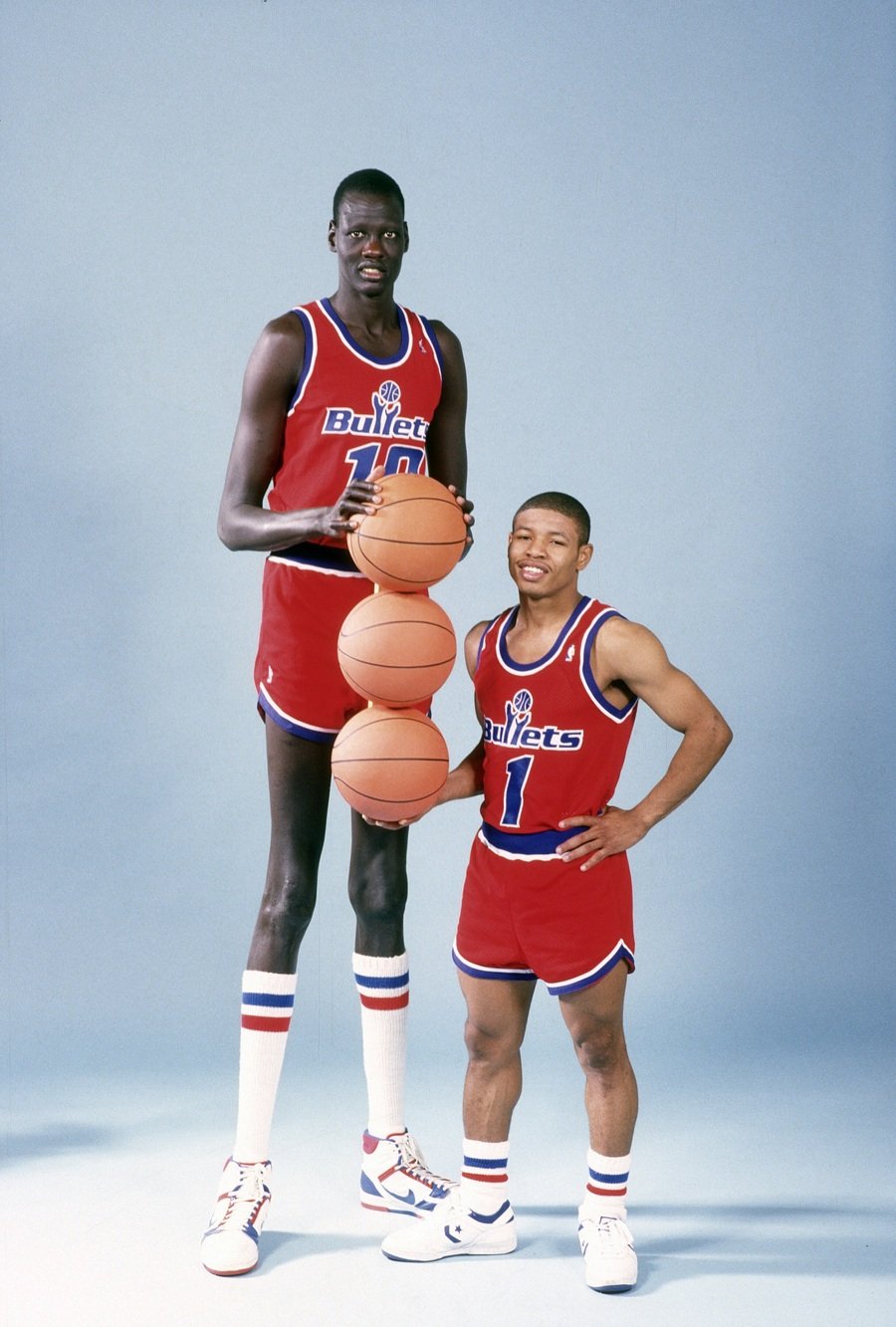 (Photo by Focus on Sport/Getty Images)

Muggsy Bogues was born Tyronne Curtis Bogues in Baltimore, Maryland on January 9, 1965. He was the youngest of 4 children. He grew up in the Lafayette Court housing projects, where he experienced a less-than-stellar childhood. At age 5, he was hospitalized after being struck by stray buckshot on the street. At 12, his father had committed armed robbery and was sentenced to twenty years in prison. His brother, Chuckie, had also begun using hard drugs around this time.

In Baltimore, he played basketball for the Dunbar Poets at Dunbar High School. During Bogues' junior year, their team finished the season at 29-0, and then 31-0 in his senior season. The Dunbar Poets were ranked number 1 in the nation by "USA Today."

Muggsy Bogues would go on to receive multiple scholarship offers for college basketball, with various schools such as Virginia, Seton Hall, and Penn State displaying interest. He chose to attend Wake Forest University, where he played for 4 years. In 1986-1987, Bogues received the Frances Pomeroy Naismith Award and led the Atlantic Coast Conference in steals and assists.  During his senior year, he became Wake Forest's most valuable athlete and was given the Arnold Palmer Award.

At the 1986 FIBA World Championship, Bogues played for the USA national team under head coach Lute Olson. He played in every one of the team's games and led them in assists and steals, eventually winning them the gold medal.

In the 1987 United States Basketball League draft, Bogues was chosen second overall by the Rhode Island Gulls. Muggsy had only played for one season in the league where he averaged 22.2 points and 8.4 assists per game. However, an ankle injury eventually ended his season in the league.

In the 1987 NBA draft, Bogues had been selected 12th overall by the Washington Bullets. Included in this draft full of talented athletes were David Robinson, Scottie Pippen, and Kevin Johnson. On November 6, 1987, in Omni Coliseum, Muggsy Bogues made his NBA debut against the Atlanta Hawks. He led the team in assists.

In the 1988 NBA expansion draft the following season, Muggsy was left unprotected, and so was swiped up by the Charlotte Hornets. It was reported by the Washington Post that Bogues had no problem with the Washington Bullets leaving him unprotected in the draft and that he was excited to play with the Hornets. He would go on to play ten seasons with the team, spending most of his time as a starter and eventually becoming one of the top players of the Hornets.

Bogues managed to turn the Charlotte Hornets into a serious contender, having previously been a mediocre NBA team at best. He led the team to the playoffs three times, making it very popular among basketball fans. In 1995, after playing for 6 seasons, he underwent arthroscopic surgery on his left knee, which placed him on the injured list 3 separate times in 1995-1996. In the end, he finished the season with only 14 points in 6 games and missed 17 games the following season.

The team's relationship with Bogues went downhill after the surgery, eventually leading to Muggsy being traded to the Golden State Warriors on November 7. From 1999-2000, Bogues played 80 games during the season. However, because of his chronic knee injury, he only played in 3 games during the 2000-2001 season. He played his last game on January 27, 2001. He was traded for Chris Childs and a 2002 first-round draft pick on February 22, 2001.

On March 18 of the same year, he was named the Charlotte hornets' Ambassador and participated in the team's rebranding.

He was an inductee to the North Carolina Sports Hall of Fame in January 2020.

Bogues appeared in the film "Space Jam" along with other famous NBA players, and appeared on various shows such as "Curb your Enthusiasm," "Saturday Night Live," and "Eddie."