Monta Ellis Net Worth and salary: Monta Ellis is an American professional basketball player who has a net worth of $31 million. Monta Ellis was born and raised in Jackson, Mississippi. He skipped a college basketball career and was drafted in the NBA straight out of Lanier High School in his hometown.

Ellis was a highly touted high school prospect, a McDonald's All-American who earned Mr. Basketball USA honors in 2005. The Golden State Warriors chose Ellis with the 40th overall pick during the second round of the 2005 NBA Draft. He has since played the bulk of his career with the Warriors, from 2005 until 2012, when he was traded to the Milwaukee Bucks along with Kwame Brown and Ekpe Udoh. He played one season in Milwaukee before he signed a free agent contract with the Dallas Mavericks during the summer of 2013. Ellis stayed with the Mavs until 2015 when he was traded to the Pacers. The six-foot-three, 185-pound shooting guard/point guard earned 2007 NBA Most Improved Player accolades. To date, he has appeared in more than 800 regular season games with a 19.4 points per game average to go along with 3.7 rebounds and 4.9 assists per game. Ellis has been to several postseasons, once with Golden State in 2007, once with Milwaukee in 2013, once with Dallas in 2014 and again in 2015. Then with Indiana in both 2016 and 2017. He has averaged just over 13 points per game during the playoffs. 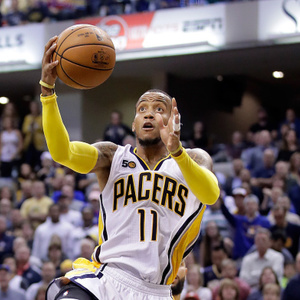