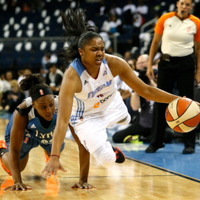 Monica Wright net worth: Monica Wright is an American professional basketball player who has a net worth of $200 thousand. Monica Wright was born in San Antonio, Texas, and grew up in Virginia. She first made a name for herself as a basketball player during high school at Forest Park High School. She was the Gatorade Virginia Player of the Year her senior year, and was ranked as the #2 guard in the nation. She was also named the 11th best player overall. She went on to attend the University of Virginia, where she was subsequently named ACC Rookie of the Year. She was chosen as a member of the ACC All-Defensive Team her sophomore and junior years, and was a first team selection her junior and senior years. She was ACC Player of the Year her senior year, and National Defensive Player of the Year. The Minnesota Lynx drafted her in 2010 as second pick overall. She received WNBA Rookie of the Year honors her first season with the team. The Lynx went on to win the WNBA Championship in 2011. In July 2013, Monica Wright announced her engagement to NBA star Kevin Durant. Their engagement was ultimately called off.