Mo Williams net worth: Mo Williams is an American basketball player who has a net worth of $20 million. Mo Williams was born on December 19, 1982 in Jackson, Mississippi. He attended the University of Alabama and won SEC Freshman of the Year in 2002. Williams was chosen by the Utah Jazz as the 47th pick in the 2003 NBA Draft. After one season in Utah, Williams signed with the Milwaukee Bucks, and played there from 2004-2008. Before the start of the 2008-09 season, Williams was traded to the Cleveland Cavaliers, where he played beside LeBron James for two seasons. He became the vocal leader of the Cavs after LeBron left for Miami, but his stay there was short lived as he was traded to the Los Angeles Clippers in February of 2011. He finished that season and the following one before being traded back to the Jazz prior to the 2012-13 season. In August of 2013, Williams signed with the Portland Trailblazers, where he currently plays. During his NBA career, Williams has made one All-Star team, in 2009, and also recorded a triple-double in 2006 while with the Bucks. He scored a career high 44 points as a member of the Cavaliers in a February 2009 matchup. 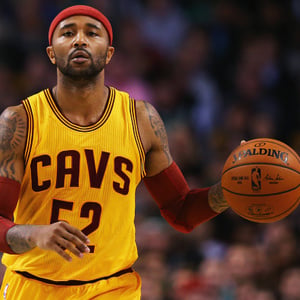