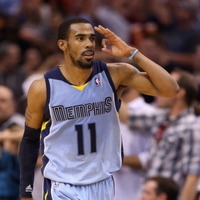 Mike Conley net worth and salary: Mike Conley is an American professional basketball player who has a net worth of $70 million dollars. His 2016 $153 million contract was at that point the largest contract in NBA history. It boosted his annual salary from $9.5 million in 2015 to $26 million the next season. His salary broke $30 million ahead of the 2018 season.

Mike Conley was born in Fayetteville, Arkansas in October 1987. He is a 6'1″ point guard who was a McDonald's All-American while playing for Lawrence North High School. Conley played college basketball at Ohio State where he was named First-team All-Big 10 in 2007. He was drafted #4 by the Memphis Grizzlies in the 2007 NBA Draft. He played for the Grizzlies from 2007 through the 2019 season. He joined the Utah Jazz ahead of the 2019 season.. Conley was selected to the NBA All-Defensive Second Team in 2013 and won the NBA Sportsmanship Award in 2014 and 2016. He is the son of Olympic Gold and Silver medalist triple jumper Mike Conley Sr.

In July 2014, Conley married his longtime girlfriend Mary Peluso who he met while attending Ohio State. They welcomed their first child in 2016.

Contracts: In July 2016, Conley signed what was then the largest contract in NBA history. The deal was for five years and paid $153 million. Amazingly, by 2020 that contract would not even rank in the top 20 in terms of size.

Between June 2017 and June 2018 Mike Conley earned $30 million from salary and endorsements, the majority of which came from salary. That's enough to make him one of the 50 highest paid athletes on the planet.