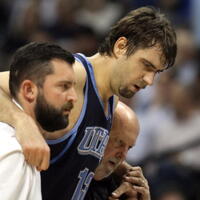 Mehmet Okur Net Worth: Mehmet Okur is a former Turkish professional basketball player who has a net worth of $30 million. Born in 1979 in Yalova, Turkey, Mehmet Okur began playing professionally in his native country. The six-foot-eleven, 290-pound center/power forward first played for Oyak Renault in 1997, then later Tofas S.K. and Efes Pilsen. The Detroit Pistons selected Okur with the 37th overall pick during the second round of the 2001 NBA Draft. He has since played with the Pistons from 2002 until 2004, the Utah Jazz from 2004 until 2011, Turk Telekom in 2011, and the New Jersey Nets from 2011 until 2012. Okur was part of the NBA championship-winning Pistons' team in 2004, but following the season, his salary expectations were too high for the Pistons to handle with their cap situation. Okur landed a six-year, $50 million deal with the Jazz. He was an NBA All-Star in 2007, and in 2009, landed a two-year, $21 million contract extension. Okur played on the Turkish men's national team at the 2001 FIBA European Championship, earning a silver medal. He has been married to his wife, Miss Turkey finalist and actress Yeliz Caliskan, and has two children: a daughter named Melisa and a son named Yigit Mehmet.